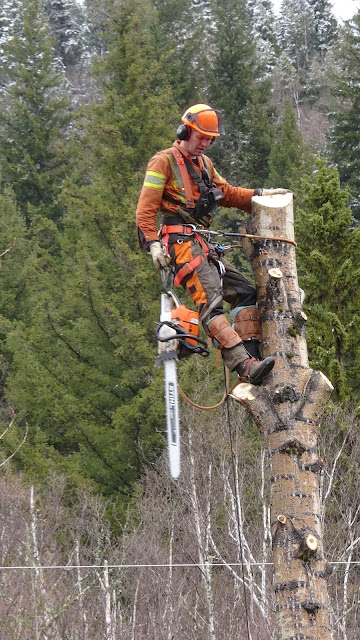 I had decided last fall that I wanted to take the cottonwood tree, that was interfering with my satellite TV, down, so I called Courtney Lipke, a local man who does such things.  Courtney came out to take a look and said he could do it, but that he would have to wait until spring because the cold weather was already causing frost inside the bark and so it was starting to get too slippery for the spurs which he used to climb the tree.  He said he would give me a call when spring arrived.

Courtney, true to his word, gave me a call the other day to check if I still wanted the tree down.  We arranged to have it done last Tuesday, “unless it is windy or rainy.”    When Tuesday morning came it started snowing, so I figured that the job would be postponed, but he showed up at the appointed time ready to go.  By then the snow had stopped.   Courtney harnessed up into all of his safety gear and began climbing the cottonwood.

Watching Courtney work was fascinating, it was a show that I could probably sell tickets for.  As he climbed up the tall cottonwood, he sawed off the branches as he went.  He was way up there when he was ready to chainsaw the top of the tree off.  I was a bit worried because the cottonwood had been topped eight years ago, and from my timber cruising days I knew that whenever any break was made in the bark, it opens the tree up to rot and I certainly didn’t want anything unexpected to happen to Courtney, working so high off the ground.

Courtney knew what he was doing, and the top of the tree was firm, so he pulled up his big chainsaw and took off the top, which fell to the ground with a crashing boom.   He then worked his way down the trunk of the tree, cutting off sections of the truck as he descended.

I had originally thought I would have him cut the cottonwood all the way to the ground, but then decided to leave it about 10 feet, (3 m.) tall.  That way it would send out new shoots, blocking the view and noise from the road, plus continue to suck up a lot of ground water.  Trees really utilize a lot of groundwater and when they are die sometimes the water table rises, and around my place the water table is already too high.

I will be long dead before this cottonwood interferes with my satellite reception again, so that is one problem I needn’t worry about, however there is an awful tangle of limbs, branches, and tree trunks in the brush around the tree that I now have to deal with.  Cottonwood isn’t great firewood, but I will saw it up and split to burn as firewood anyway, so most of it won’t go to waste.

It was quite a show to watch Courtney working so high, without a net. 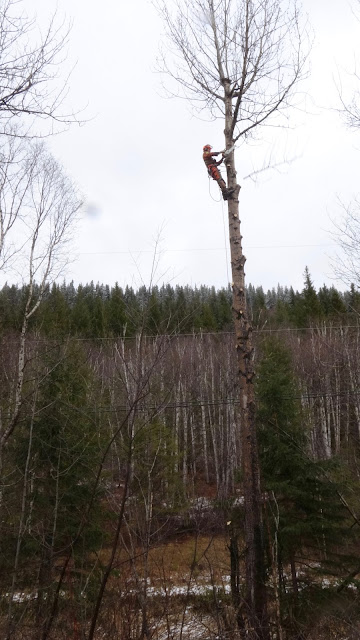 Take a look at my paintings:  davidmarchant2.ca
Posted by Life in BC's Robson Valley at 09:10