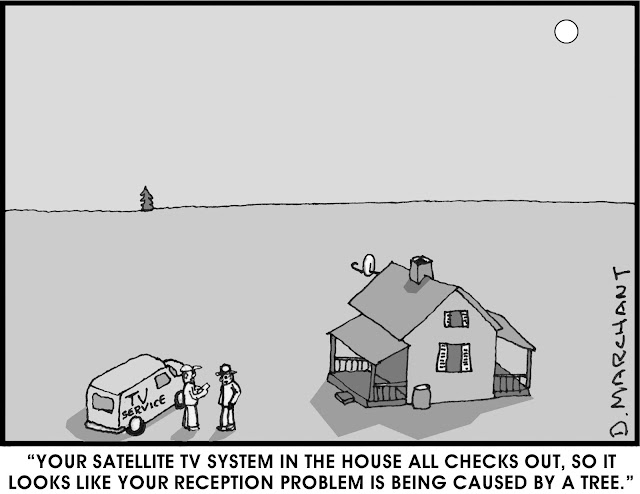 The cartoon above was inspired by all of the problems we have had with trees getting in the way of our reception, both for satellite TV and our internet, which we get through a radio repeater on a mountain.   I love to have trees around our house and on our property, but sometimes they do cause problems.

We have satellite TV and need to have a clear shot from the satellite dish to the satellite.  When we first got satellite, I put the dish on the eves of the roof and that worked well for a long time, but our house is located very close to the property line, and over the years, the trees on our neighbor’s land grew taller and taller and eventually started blocking out both our internet and TV.

I ended up having to find another internet provider that used cell phone technology instead of the “line-of-sight” radio signal, so that solved my internet problem.  The satellite TV also needed line-of-sight to get the signal from the satellite which is low on the horizon.

It was very difficult to find a place on our land to get that signal, because of all of the tall trees on my neighbor’s property.  I did finally find one spot, 54 m. (60 yards) away from our house in our paddock, where I could pick up the satellite.  I put the dish there and had to bury a long cable to the house, but we got a good strong satellite signal and all was well.

Of course, the trees kept growing.  Every summer when the leaves were on the trees, we began to notice that if it got windy, suddenly we would lose our TV reception off and on.  It was difficult to figure out which tree was causing the problem, but I finally pinned it down to a tall cottonwood that was on our property, between the barn and the road.

Eight years ago I hired an arborist to come and top several of the big willow trees that had developed thick branches that arched over our house.  While he was here I also had him top the cottonwood tree that was causing problems with our TV reception.  When that was done, we had good satellite reception again.

That one topped cottonwood was not done with us, it sent out new branches from the top that grew like weeds.  Again, last summer we began to have TV reception problems again.  I was tired of having one tree cause us so much grief so I called a local arborist and he came out to deal with the cottonwood yesterday.