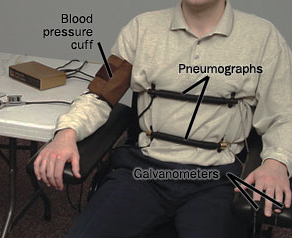 My parents owned an acreage where our home was located.  On a corner of that land was a small house that my parents rented out.  Once when I was a freshman at university, living in my parent’s basement, they collected the rent from the small house and it was in an envelope, sitting on top of a chest of drawers in my mom and dad’s bedroom.   One day when none of the family was home, my dad had a air conditioner repairman come to fix the ailing air conditioner in the bedroom.  Later it was discovered that the envelope full of rental money had disappeared.

My father reported the robbery to the police and they sent a detective out to investigate.  When the detective found out that there was a long-haired teenage son living in the house, who do you supposed became suspect number one?   You guessed it, it was me.

The police wanted me to come down to the station to take a lie detector test.  I had, of course already told them I hadn’t taken the money, but they were skeptical.  I had seen lots of people taking lie detector test on TV shows and thought it might be an interesting experience, so I told them I would do it.

I went to the police station and they sat me in a room and began to question me.  I told them again that I hadn’t taken the money and that I had never in my life felt any desire to steal anything.  I explained that if really needed money, I was sure that if I just ask my parents and they would give it too me.  I, of course, liked to have money, and worked to earn it, but I would never steal it.

They then rigged me up to the lie detector.  There was a strap that went around my chest, a blood pressure cuff that was wrapped around my upper arm, and small straps that went on the end of a couple of my fingers.

They explained that I should just stay calm and not be excited.  They would just ask me some questions and I should answer them.  They told me that on the first question I should answer “Yes” even though that was not correct.

They ask me something like, “Is your name John Smith?”  I knew that I had to lie, but, I wanted to “beat” the machine, so I tried very hard to stay really calm and collected, and I answered matter-of-factly, “Yes”.

The detective watched the needles swing across the rolling paper and said, “You are lying.”

I was pretty impressed with the accuracy of the lie detector, and then they began to question me in earnest.

“Is your name David Marchant?”

“Is David Marchant your name?”

I replied excitedly, “You just asked me that.”

That irritated the cop, who told me not to say anything except “Yes” or “No”.   He explained that all of the questions he asked, would be repeated in two different ways.

My lie detector session continued and when it was completed, they confirmed that I had not lied, and was free to go.

Having lost their main suspect, I am not sure what happened to the police investigation of the theft.  My parents never heard anything further from them and never got the rental money back.

For me it was an interesting experience to take the lie detector test, “just like something you would see on television”. 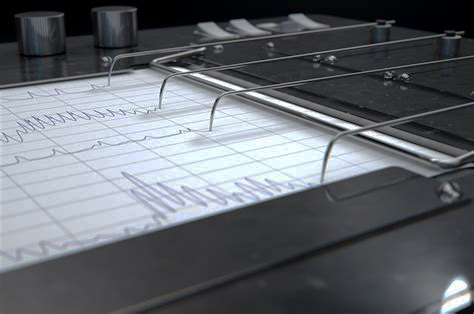 View my paintings:  davidmarchant2.ca
Posted by Life in BC's Robson Valley at 09:21