Four Moose in a Mile 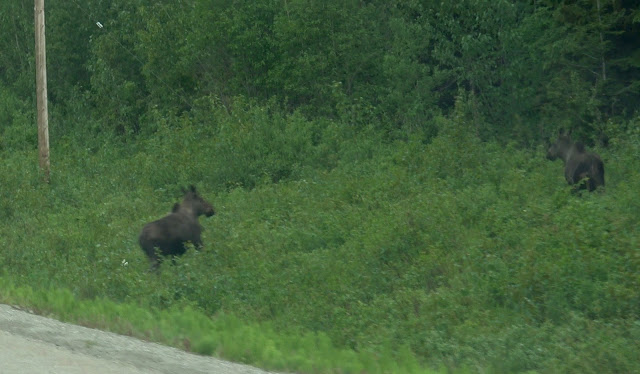 I had to drive up to Prince George yesterday.  Usually when we make the drive during this time of year, bears can be seen grazing along the edges of the road, and yesterday I did see one black bear doing just that, but the biggest thrill of the day was seeing moose.  The moose population is in decline in BC, so it was a delight to see one, but yesterday I saw four of them within a mile’s drive.  Moose generally hang out alone, so it was a rare sighting so see so many.

I was on a straight away on Hwy. 16 when far in the distance, I saw the vehicle in front of me brake, then I noticed the silhouette of a moose scamper across the highway in front of the driver into the verge on the left side of the highway.  When I got up to the point where I figured it would be, I scanned the growth on the left, but couldn’t see the moose, but at that same time, I spotted another moose on the right side trotting along the ditch.

I drove on and probably only got about a mile further down the road, when I saw two more moose which I managed to get in a photo.

Maybe all the moose were leaving a meeting or something, it seemed highly unusual to see so many of the big gainly critters in such a short distance, when normally I feel lucky to catch the sight of one on the way to Prince George.