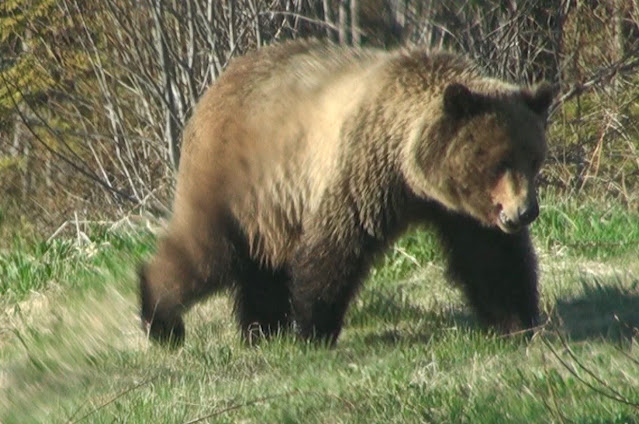 Last week when I was in a grocery store up in Prince George, I mentioned to the cashier that I had seen 4 moose and a black bear on my drive from McBride.  That prompted her to tell me a story about what had happened to her father.

A few years ago her father and a friend were hunting moose in a wild area between McBride and Prince George.  They managed to shoot a moose and went in to butcher it.  As they were doing it, suddenly a grizzly bear arrived on the scene and the hunters were forced to give up their kill and retreat.

A few years ago while listening to CBC on the radio I learned that similar incidents to the story she told was something that was becoming more and more common.  It seems that grizzlies have learned to associate gunshots, with moose meat, and so if they hear gunshots, they will immediately follow the sound and get an easy meal once they have scared off the hunters.

Animals quickly learn about taking advantage of food that is the result of human activities.  One summer when we drove to Edmonton and pulled into to a motel, I noticed that a bird immediately hopped up to the front of our car and began to eat the smashed insects that we had hit while making the trip.

Of course there can be a definite down-side to this animal-human interaction as it often leads to the death of animals by the humans.