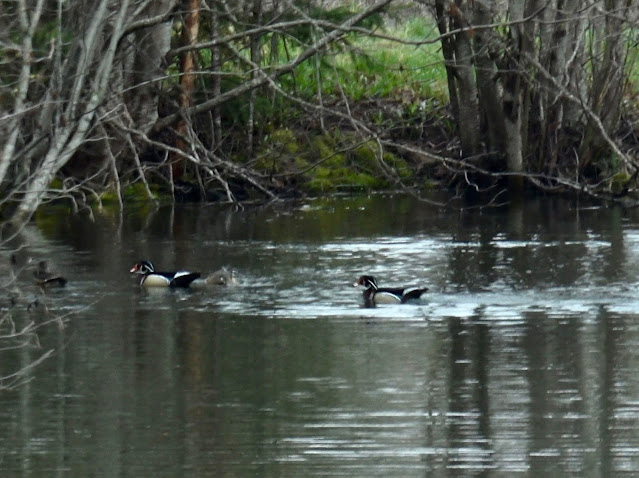 It’s been extremely difficult to be optimistic about anything these days, as things in the world deteriorate, and then just get worse, but yesterday something happened that actually brightened my day--there were two pair of Wood Ducks on my pond.  I had given up hope that this would ever happen again.

One spring thirty something years ago, the first year after I had my pond dug and it started filling with water, some unusual-looking ducks arrived.  I didn’t know what they were but discovered they were Wood Ducks.  I had spread old hay bedding from the barn on the bare banks of the dam to encourage grass to grow and the Wood Ducks had discovered there were oats, that my goats had wasted, in the bedding, and that encouraged them to hang around.

They disappeared over the summer, then returned in the fall, lots of them.  One evening I counted 42 of them on the pond.  After that, Wood Ducks returned year after year.  They nest in hollow trees, so I was able to get some Wood Duck nesting boxes and hung them up in some trees around the pond.  Some of the Wood Ducks used them to hatch their young.

One Sunday I watched as the baby ducks, looking like balls of fluffy feathers, leaped out of the nesting box to the ground, 15 feet (4.5m) below, urged on by their mother.

I had a reputation locally about having the rather rare Wood Ducks at my pond, something that was unique in the Robson Valley, but then rather suddenly, the Wood Ducks seem to have disappeared and no longer came in the spring.  No one in the Valley spotted any in other places either.  I don’t know what happened to them, but for about 15 years, there were no Wood Ducks.

About 3 years ago a local birder told me she had spotted some Wood Ducks at the large McBride sewage lagoon.  Last year when I was walking around the pond, a couple of water fowl flew off and their call struck a chord in my memory, it sounded like Wood Ducks, but I didn’t really see them to tell for sure. Then yesterday I saw some splashing activity down on the pond, got out my binoculars, and there they were:  2 males and 2 female Wood Ducks.

The males have very distinct coloration and markings.  The females are brown, but have a white spot around their eyes.   I don’t really care if they nest here or not, I am just happy to see them in the Valley again.  I had given up on ever seeing them again. 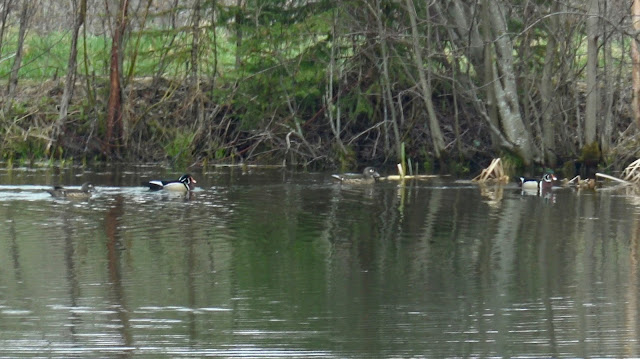 Take a look at my paintings:  davidmarchant2.ca
Posted by Life in BC's Robson Valley at 07:54