Why Did McBride Paint Its Sidewalks Blue? 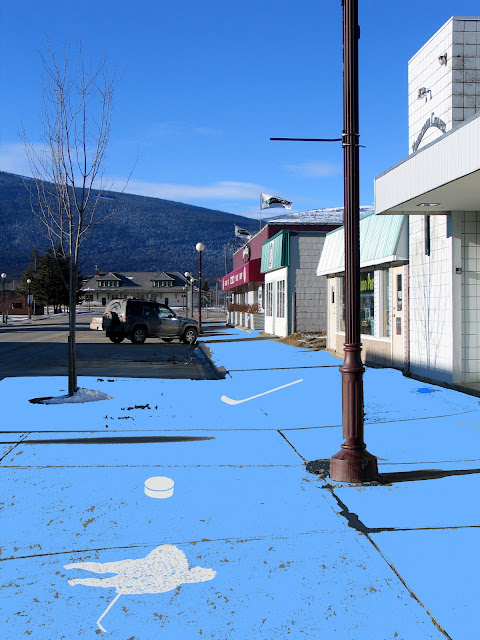 Every year I put out a trivia-filled calendar.  The other day I got a call from Trudy, who lives in Kamloops and always buys my calendars.  Trudy has called me before wondering about some of the trivia on the calendar.  She once wondered about the pet rabbit that saved her owner’s life.  On this most recent call, she had a question about McBride.

She had just turned to the month of May and started reading through the trivia and was stopped cold when she got to May 3rd, and read:  “McBride paints its sidewalks blue, 2006.”  She wondered why, and came up blank when searching on the internet, so I explained:

The residents of our tiny Village of McBride, like other Canadian towns and cities, love ice hockey, something I do not share, because of my lack of the male sport’s gene.  It had just been announced that “Hockey Night in Canada” the source of weekly TV hockey games, was having a contest for towns.  The town that could best demonstrate its love for hockey, would win an upgrade to their arena, plus a pre-season NHL game in their town.

Well, McBride was “all in” and, a-tremble with anticipation.  All kinds of ideas to show its love for hockey were suggested and many were acted on.  Those of us who could care less, didn’t really know what all was going on until we drove into town one day and noticed that all of the sidewalks had been painted blue, with hockey images stenciled on it.  It all seemed pretty bizarre to me, but it was done.

That is why McBride had blue sidewalks for a few years; until the blue paint eventually wore off.  Sadly for McBride the blue sidewalks didn’t bring home the prize, and the big effort is now mostly forgotten.

I had no photo of the blue sidewalks, but photoshopped the one above to give you an idea of what it looked like.

You can read the other trivia from the month of May from my calendar on the banner at the top of my website:  davidmarchant2.ca.