Sorry, Mac. You Were Right to Bark 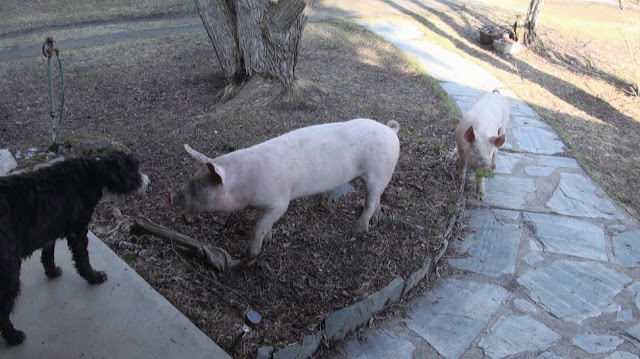 Here is an incident from 2012 that features Macintosh, our laidback Old English Sheepdog.

“What’s wrong with that dog?”   Mac generally doesn’t bark.  Well, maybe sometimes, when a squirrel gets on his nerve.  I went back to my book.

I was reading, and had just two more pages to finish in the novel, but I didn’t want Mac to get into the habit of habitual barking, so I put the book down, got up, and walked down the stairs, opened the front door, to yell at him to stop.

When I opened the door, I was gobsmacked.  My eyes saw, but my brain just temporarily shut down.  It seemed like I was in fantasyland, because standing right there by the porch were two pigs looking at me, while Mac stopped barking, happy that I was there to help him.

When my brain began firing again, I tried to chase them away.  They were friendly enough, but seemed happy to be in our front yard.

Where did they come from, I wondered.  The only person in the neighborhood that I had heard had some pigs, lived a mile away.  I called my wife to come out with a broom to keep the pigs from destroying things, while I went back inside to make some phone calls.

I called the guy I thought had pigs, and found that his phone was disconnected.  Then I called my next door neighbor, but he didn’t answer, so I left a message about having two pigs in my front yard and asked if he knew who might own them.

I then called the neighbor on the other side of my house and explained to their teenaged daughter why I was calling.  She laughed and said they didn’t own any pigs.

Having learned nothing from my phone calls, I went back outside and took over from my wife.  I decided the best course of action would be to try to herd the pigs into my barnyard, which had a fence all around it.

When I tried to herd the pigs, Mac’s herding instinct kicked in and he happily joined me, barking and darting around.  Unfortunately, Mac always seemed to go the wrong way, blocking the pigs from going into the paddock.  Eventually, in frustration, I put Mac into the house and returned to deal with the pigs alone.

I managed to herd one of the porkers into the paddock, but the other took off in the other direction.  The captured one headed down the fence line and the which inspired the free one to follow him, but on the other side of the fence.

I grabbed a rope and made a noose, thinking I would try to lasso the free pig, but it was starting to get nervous and beginning to think that I was untrustworthy, so he didn’t let me get too close.  I scrambled behind him through brush and around the woodpile, but I couldn’t catch him.

About that time, Bruce, the next door neighbor I had called, came through an opening on our property line with his two dogs, and I was happy learn that the pigs were, in fact, his.  With his help, we managed to get and secure the freed pig into the barnyard with his buddy, at which point Bruce went back home to get some “slop” to tempt the pigs back home.  Meanwhile, the pigs were busying themselves, rooting around the plants in the paddock.

Bruce soon returned with a bucket of slop and two hot dog buns, and like the Pied Piper being followed by the rats, soon Bruce, along with his dogs, followed by the two pigs, were all parading back toward their home.

Another exciting episode of “Life in McBride” had come to an end.

You can see my paintings:  davidmarchant2.ca