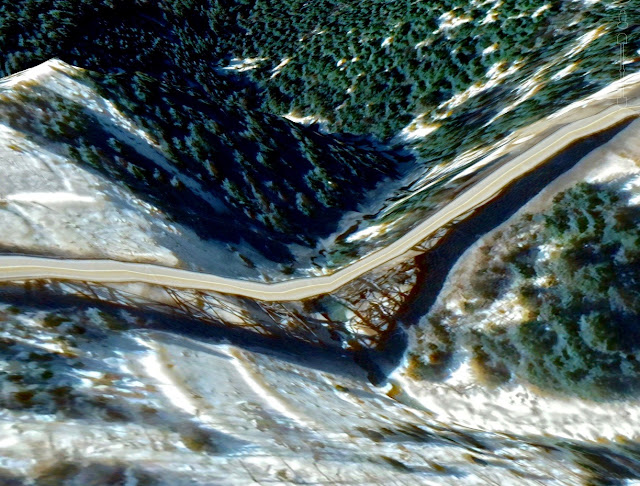 One of the things that I enjoyed the most during my 25 years of working for the BC Forest Service was listening to the stories told by the “Old Timers” on the staff, during the coffee breaks.  I wish I could have recorded them, because not only were they full of humor, but also filled with a lot of local Robson Valley history.

Several of the stories they told centered around the West Twin Bridge, which is located 17 miles (28 km) on Hwy. 16, west of McBride.  There was an old highway that connected McBride to Jasper, Alberta, but nothing but a railway that connected it to the big center of Prince George, BC.  Highway 16 was finally built to make that connection and was completed in 1969.

The photo above is a “3D” image of the West Twin Bridge taken from Google Earth.  The 3D image distorts the bridge and makes it look pretty rickety, but you can see that it goes over the deep gorge of West Twin Creek.

One story that Alex the old Forestry warehouseman, told me was that when the Provincial Highways engineers where planning the highway from McBride to Prince George, they couldn’t decide on which side of the Fraser River they should make it.  Alex said that in the end, they decided on the south side because “it allowed them could build more bridges”.   I have no idea if this was true or not, but certainly the bridge they had to build over West Twin Creek presented a unique challenge.  Not only did it have to span the deep canyon, but it was also curved.

Building the supports underneath the bridge on the steep slopes of the gorge was dangerous work.  Two local men working on it were killed when part of the slope above them gave way and buried them.  Their bodies were never recovered.

The Highway’s engineers planned to incorporate a heating system in the highway’s surface on the bridge to melt the snow.   The heating system wasn’t dependable, sometimes it melted the snow, sometimes it didn’t, and it became unsafe for drivers, coming down the slope to the curved bridge, which could be covered with glare ice if the snow on it melted, then froze.   When we moved to McBride in 1977, we could still see the small metal building that housed the heating mechanism on the east side of the bridge, but it has now long disappeared.

I will post another West Twin Bridge story tomorrow.