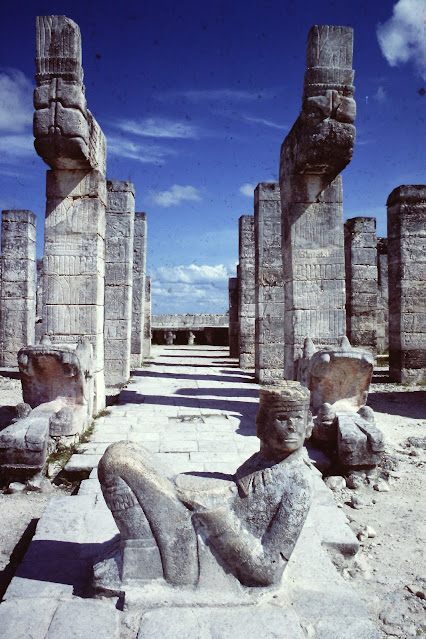 In 1981 we vacationed in Mexico.  It wasn’t a package tour, we just traveled around on our own.  We decided to divide our three month vacation into three sections.  We would spend a week in Mexico City, followed by a week exploring the many Aztec and Mayan archeological sites, then a week on the beach in the Caribbean Coast.

I had always been fascinated by the culture of the Central American Indians and their strange religion that included a lot of sacrifices of humans, mostly captured prisoners.

When we started visiting the museums and archeological sites we began seeing these strange statues called “Chacmool”.  They were in the shape of a man on his back, looking to the side, holding something on his abdomen.

Chacmool was not a god, but a messenger that would transfer the sacrifices put on its stomach to the gods.  It was believed that often those sacrifices were humans, victims stretched out over the statue, who then had their hearts cut out, and held up still beating.  It was a terrifying and horrific thought.  Most of these communities existed by agriculture and were in arid places, where rainfall was often scarce and the priests convinced the populations that human sacrifice would please god and bring the rain..

I did a little research on Chacmool before I wrote this and now it seems that the human sacrifices were down played and replaced with sacrifices of tamales, tortillas, and colorful feathers.  I wonder if this is just an attempt at public relations, because many of the Chacmools were located in places where a lot of people could watch.  I doubt that they would all gather to watch some tortillas being “sacrificed”.

I was surprised to see the wide geographical range of Chacmool statues.  They have been found in Mexico, Guatemala, El Salvador, and Costa Rica.

They are strange and very creepy. 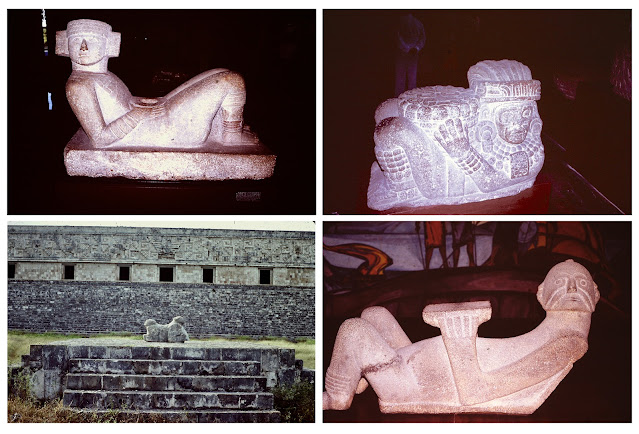