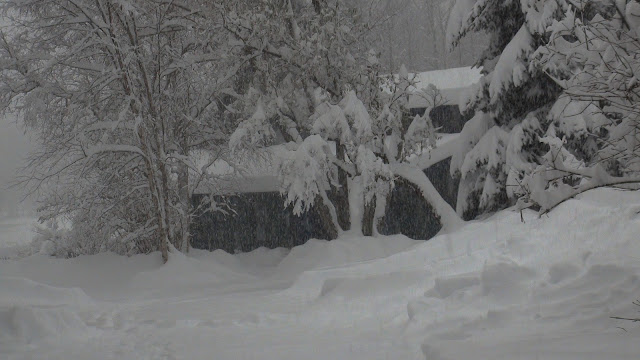 Several days after we returned from our Christmas drive to Evansville, we were welcomed back to McBride by -30° F temperatures.  When the frigid temperature began to warm, the wind, and then snow, began.

I had driven a two wheel-drive Forestry truck home after a day at work, but since it was snowing pretty hard, I decided to parked it up at the road instead of down our driveway and by the house.  Since it was just a 2-wheel drive, I was afraid it might get stuck driving up our driveway in the morning.  Even after that precaution, it still took me two hours to dig the truck out from all of the snow that buried it overnight, before I could drive it to work.

When I did finally get to work, I wondered why I came.  Because of the deep snow, most of my co-workers failed to make it into work.  Those of us who did, all left early in the afternoon, because the snow continued to fall furiously throughout the day.

The four of us that lived on my road, piled into a Forestry 4X4 truck which Roger, who lived the furthest down the road, drove.  There was 24 inches of snow on the Valley bottom and some of the drifts were 4 foot deep.  After I got home, my wife and I snowshoed over to our elderly neighbor’s house.  She didn’t have a vehicle so the snowshoed path we made would allow her to walk up to the road.

Luckily, the next day was a Saturday and I spent it shoveling snow off of the roof, greenhouse, and sun deck.  We then noticed that Sundance, our little white Pomeranian dog, had gone missing.  We called and called, but got no response.  Eventually we discovered Sundance under the deck.  He had accidentally slipped down one of the steep snow piles I created when shoveling the deck, and then couldn’t climb out.  That night, one of the Mennonite farm boys from up the road came by with a tractor and made a short job of plowing out our driveway.

Snow storms continued to pass through the Robson Valley and build up on the ground.  At the time, I had never heard of “el Nino,” but now know that in 1982 there was a strong el Nino and by the end of January, there was more than 36 inches of snow on the ground.  This made snowshoes mandatory for going anywhere outside the house.

One day I could no longer find my snow shovel.  I assumed it was buried somewhere under the snow.

These days, with the crazy weather we get, we often see stories on the news showing places that have gotten very deep snowfalls.  Usually that snow melts away after a few days, often causing flooding or other problem.  Up here in Interior British Columbia, once the snow falls, it sticks around, sometimes into March.   Usually by Mid-February after we have accumulated snow all winter, we normally have about 24 inches (60 cm) on the ground.  What was unusual about 1982 was that we got all of that snow in the middle of January.