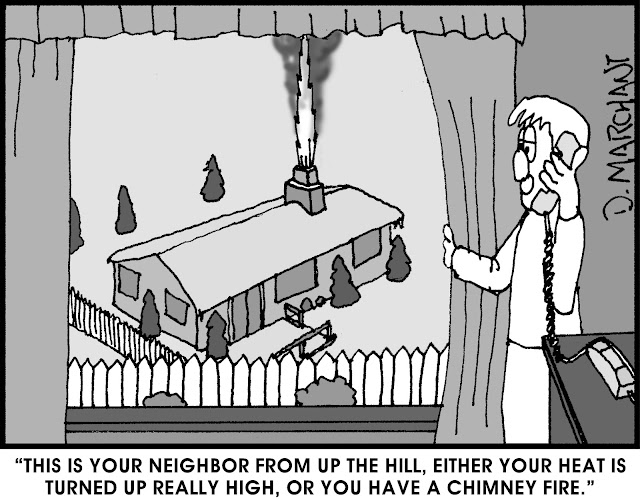 Decades ago when we bought our house, one of the things I had to learn was how to use wood heat. One of the important things that I knew nothing about, but had to learn was all about creosote and chimney fires.

One winter’s night in 1982, I woke up and smelled what I thought was my wife’s boots burning.  I got up, walked to the wood stove to check if her boots were too close to the wood stove.  When I got to the wood stove, I could see no boots, but I could hear a powerful sucking sound coming from the stove and then I realized it was a chimney fire.

A chimney fires occur when, over time, the gases from the burning wood condense on the inside of the cooler chimney, and form creosote. Creosote is a black, crusty, flaky, tar-like substance.  When the creosote builds up enough and you have a really hot fire in the stove, the intense heat can ignite the creosote that has formed inside the chimney, and it will burn furiously.  It can sound like a jet engine and produce flames like a blow torch.

My chimney has a ceramic tile liner, inside concrete blocks, and there was still lots of snow on top of our metal roof, and though I really didn’t think the chimney fire would cause any problems,  I put on all my winter gear, got a ladder, and climbed up onto the roof just to check what was going on.

When I got to the chimney, I took a quick look down into its depths and could see what appeared like burning red hot coals at the bottom of the chimney.  I grabbed some snow from the roof and dumped it into the chimney to extinguish the chimney fire.  I later realized I should have just let it burn itself out to get rid of the creosote that remained.

Now to prevent chimney fires I always get my firewood early in the spring and split and stacked it so that it has a long time to dry it out over the summer.  (Burning wet and green wood causes more creosote).  I always try to make a hot fire first thing in the morning to heat up the chimney, so there won’t be so much condensation and creosote throughout the day.  I have a chimney cleaning brush and periodically clean the creosote from the chimney lining.