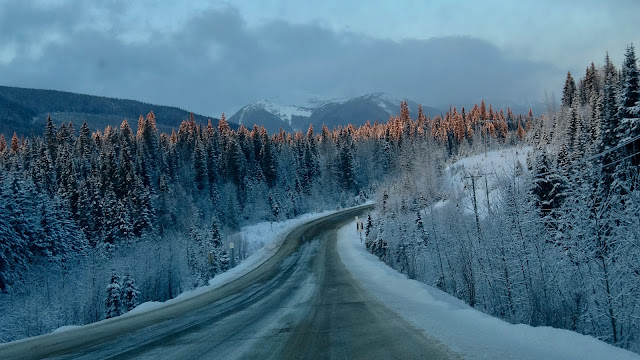 Yesterday, I spent the blog complaining about how dangerous it was to drive from McBride to Prince George on Hwy. 16 during the winter.  This morning I discovered a souvenir from my drive on Thursday:  a cracked starting to spread across the windshield.

There are a lot of transport trucks traveling the route and whenever one goes by, they throw up “sand” put down by the Highways Dept. to add traction to the ice.  Unfortunately, some of that “sand” that is spread by Highways could be more accurately described as “pebbles”.   They are like bullets flying up and hitting the windshield.  This will be the 3rd time in seven years that I will have to replace the windshield on our car.

Every time I drive the highway I usually see something I want to photograph.  Generally we don’t have time to stop to take a picture, but on my last trip my appointment wasn’t until noon, so I had time to pull over and snap the photo above.