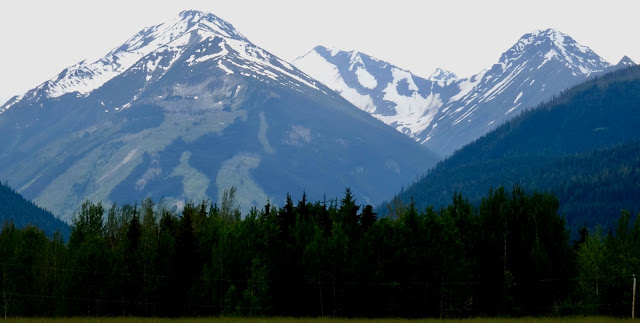 The other day when we were walking on Museum Road, we got this view up the Dore River valley.  It spurred memories of my time working for the BC Forest.

See the irregular patches of green on the mountain slope, they are the remains of old slash burns that escaped.  I just shake my head in disgust every time I see them.

Logging was done further down the slope of the mountain.  After they got done logging, there was always an amazing amount of “waste” (unwanted trees, limbs, etc) strewn all over the logged area.  The practice was then to have a “slash burn”.  The cutblock (area logged) was just set alight to burn up all of the wood that was lying around.

Often forestry staff were eager to get the process of burning all of the slash over with, so it was often lit up when conditions were too dry.  As a result, the flames racing through the cutblocks, would continue its upward movement into all of the trees on the mountain slope above the block.  All those scars you can see on the slope are the result of escaped slash burns.

I hated slash burns from the first time I experienced them in the Robson Valley.  Just like during forest fires today, very thick smoke would fill the Valley, obscuring the sky and mountains and damaging every one’s lungs.  Later when we learned about carbon in the air causing global heating, I was further disgusted when the Forest Service put out a publication saying the slash burning didn’t contribute to global warming because it was smoke from trees, a renewable resource.  It was of course, total BS, an attempt to “greenwash” the practice.

Fortunately, under public pressure, the Forest Service has greatly diminished the practice and slash burning is now rarely done.