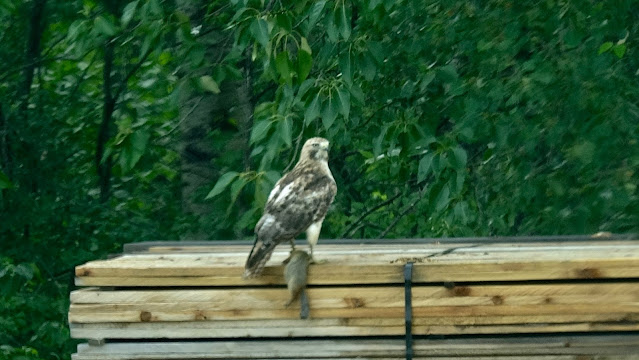 In 1966 I went to see the movie “Blow-up.”  What I most remember about the film was the one scene where the photographer walked into a concert and the Yardbirds were playing a song.  Wow, I thought, I really like that song ( https://www.youtube.com/watch?v=jHqXWIoYRvA  ).  To me, that was the most memorable part of the film, but the storyline was interesting also.

It was about a fashion photographer that happened to snap a photo in the park, then when he got home and developed the picture and blew it up, he noticed what looked like a body laying in the bushes.

Yesterday, I drove to a local mill to pick up some lumber.  Unfortunately there was no one at the mill.   I was hauling my utility trailer and couldn’t turn around at the mill entrance, so I drove on down the road a bit until I could find a place to turn around.

Once I got back to the mill entrance, I stopped to wait a bit, hoping the owner would show up.  He didn’t.  As I waited I noticed what looked like an immature Bald Eagle sitting on a lift of lumber.  I was some distance away, but I zoomed in and took the photo you see above.  I was sort of a boring shot, of the bird sitting there on some lumber, but I always take photos of the wildlife I see.

This morning when I uploaded the photo to my computer, I was surprised and did a double take because the eagle, or whatever it was had a dead squirrel clutched in its claws.  I felt just like the photographer in Blow-up, when he saw a corpse in the photo that he was unaware of when he took the shot.

View my paintings at:  davidmarchant2.ca
Posted by Life in BC's Robson Valley at 09:28