A Little Excitement on the Way to the Jam 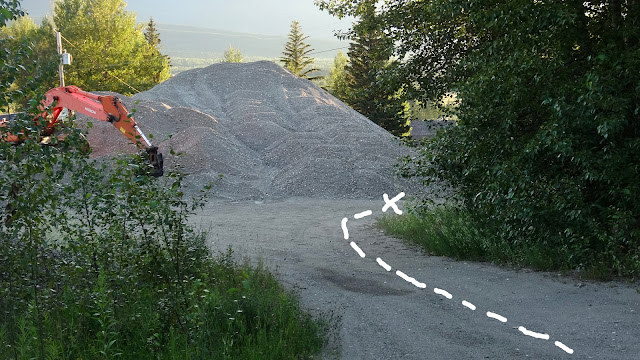 Last night was our jam night.  I drove up the road to pick up a fellow musician and then drove down the sloping road that snaked down to her house.  When I rounded the corner of the road, I saw a teenage girl on a “quad” (ATV) just below me, racing around a curve in the gravel pit (photo).  Like a movie in slow motion, I watched as she rounded the curve too quickly, then saw her and the quad, slowly tip over.

I stopped the car, ran down to the accident and found her laying on the ground dazed, and weakly yelling for help.  She was trapped under the overturned ATV and was unable to get out from under it.   Tried to calm her and I told her I would try to tip the machine that was laying on its side and was dribbling gasoline, off of her.   As I did, I was surprised just how hard the heavy machine was to move.

I managed to tip it enough for the girl to free herself out from under it, then I set the quad back down on its side where it rested and looked the girl over for injuries.  The only obvious injuries that were visible  was a goose-egg bump on her forehead and a bit of blood that had trickled down from under her hairline.  I don’t know if she had injuries to the rest of her body.

She didn’t seem to be in shock, but just in case I made her lay down in the gravel while I went for help.  Her grandparents home was in sight just across the road, so I raced over there and found her grandmother and explained what had happened and the teen’s condition.  I told her I wasn’t sure if she needed to go to the hospital.  The woman yelled for the rest of the family and they all rushed over to the gravel pit to help.

I figured they were now in charge and didn’t need me, so I got into the car and continued down the road to pick up Ingrid and continue on to the jam.

I sure hate to see kids roaring around on ATV’s.  There are so many accidents.  This teen was lucky she didn’t break her neck.  I don’t know what all injuries she did get, but I wonder what the situation would have been with her trapped alone under the machine, if I hadn’t just driven down the road and saw what had happened.