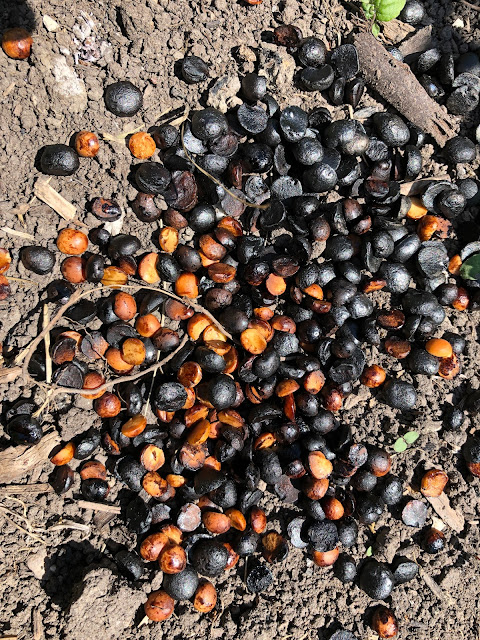 This blog brings together a couple of things that I have previously blogged about:  Eye glasses and our silicon microwave corn popper.

Yesterday I decided to pop some popcorn.  I got the silicon corn popper out and set it on the counter, then went into the pantry to get some pop corn.  My wife has put the popcorn and other things in glass jars to keep them safe from mice.  I didn’t have my glasses on, but I grabbed what I thought was the pop corn and poured some into the corn popper, put it into the microwave, pressed the buttons and waited.

I was a bit surprised that I didn’t immediately hear the corn popping like I usually do, but thought nothing of it and walked into the living room.  Then when I went back into the kitchen I could smell acrid smoke.  I opened the microwave door and out the thick smoke came pouring out into the kitchen.

I grabbed the corn popper, ran outside with it and dumped the still smoking contents into the garden. (Photo above)

I was really confused as to what just happened and why.  Slowly I pieced the story together.

When I went into grab the jar of popcorn off of the cupboard, because I didn’t have my glasses on;  everything was blurry, I grabbed the jar of lentils instead.  I didn’t recognize that it was lentils, not popcorn, when I poured it into the corn popper, and the microwave caused the lentils to burn.

The terrible smelling smoke stayed in the kitchen for a long time even though we opened the windows and doors.

I have decided to put a label on the popcorn jar.

Below is a photo I blurred to give you an idea of the way the jars looked to me.  When I went to get the popcorn, the jars were not sitting side by side so I could compare them.  That is the popcorn on the left. 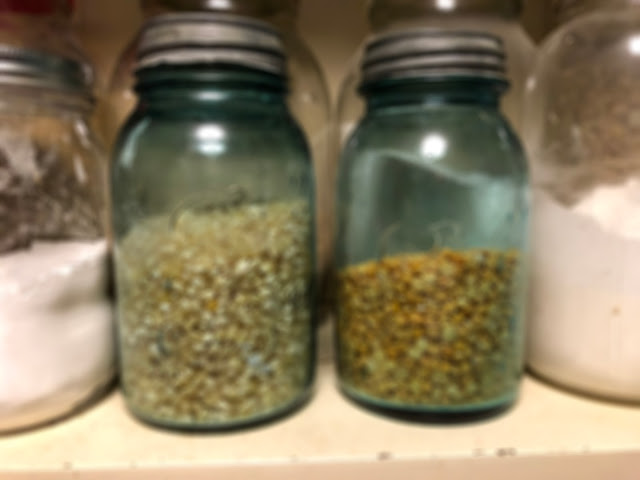 You can see my paintings at:  davidmarchant2.ca
Posted by Life in BC's Robson Valley at 09:27