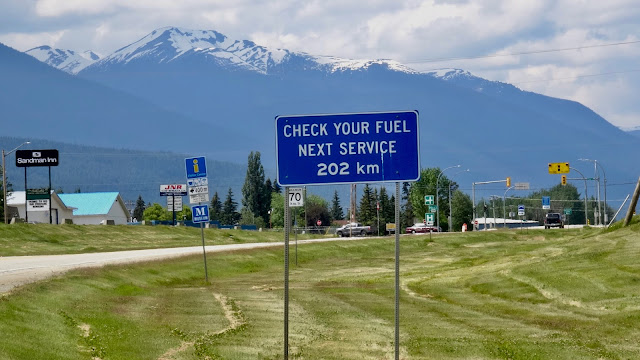 There is a reason why I often refer to McBride as “an isolated village”, it is because it is.   There is only one highway that connects McBride to the rest of the world.  As you can see by the sign, if you are traveling west, you have to travel 202 km (125 miles) before you come to another filling station.

There are no service stations (and little other signs of settlements) until you get to either Prince George, Jasper, or Valemount.  If you have an electric vehicle, an are traveling to Prince George, you are able to plug in and recharge at the Slim Creek Rest area, which is only 85 km (54 miles) from McBride.  On the drive to Prince George you don’t even see a house along the way until you get there.

Those of us who live here are used to living with the long distances between places, but visitors get the real feeling of being in the “middle of nowhere”.