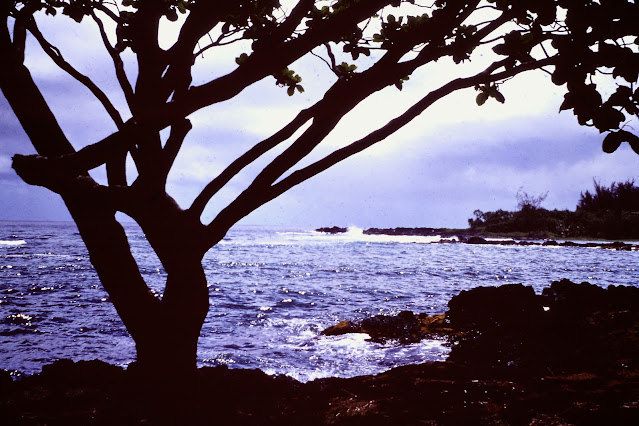 In 1969 after graduating from university I joined the Peace Corp and the group of us volunteers were flown to the Big Island of Hawaii for our training.  We were located in a rambling old school building in a tiny hamlet named Pepeekeo.  The biggest urban center close to us was Hilo.  On one of our rare “free time” periods, some of us went into Hilo to check it out.

After spending some time exploring Hilo, some of us “mainlanders” ended up in a grassy park on the edge of the ocean and decided to go for a swim.  It was not a sandy beach, but a rocky shoreline.  We got into the water and swam around for a while.  When everyone had had enough, I started swimming toward the shore and got a shock.  It seemed that even though I was doing my normal swimming, I really wasn’t getting any closer to the shore.

A bit of panic shot through my brain, I had heard of “undertows” that pulled swimmers out to sea, and wondered if that was what I was experiencing.  I didn’t yell out or anything, but began swimming with all of my might toward the shore and luckily the undertow wasn’t that strong, so I made it.  With exhaustion and a great deal of relief, I climbed back onto the rocks that lined the shoreline.

The experience was one of the first times of my life that I had come across the real power of nature, and it was sobering.  I was very lucky.

What I had thought was an “undertow” is more accurately termed as a “Rip Current”.

During the 1990’s while working for the BC Forest Service, I encountered a guy in Valemount through my work.  I didn’t know him well, but I was shocked one day upon receiving the local weekly paper to read that he had been killed while vacationing in the South Pacific.  He had gone for a swim in the ocean and had encountered a rip current that pulled him out to sea.  Reading of his death, caused by a rip current, certainly reinforced my respect for the phenomenon.

I have since come across an article about how to deal with a rip current if you find yourself in one.  The current will pull you out to sea and if it is strong, you will not be able to swim to shore no matter how hard you try.  What you should do instead of trying to swim to shore is to swim at a right angle to the current, in a direction that parallels the shoreline.  That should get you out of the area where the rip current is occurring and allow you to then swim to shore.