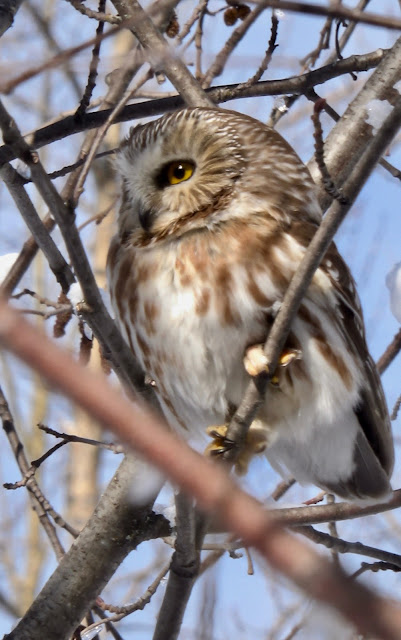 I haven’t really seen any interesting wildlife for a while, but at noon yesterday when I was walking Kona around the pond, she stopped me and started to wrestle a stick, trying to pull it out of the snow.  I stood there patiently waiting for her to either get it out or quit in frustration, but her jerking around with the stick made some bird, that must have been sitting on a nearby branch, fly off to a new location.

I caught a glimpse of the bird as it flew and noticed that it was bigger than a Chickadee, which is the most common bird to see this time of year.  I moved over so I could get a look at the bird and was pleasantly surprised when I discovered it was a Saw-Whet Owl.

Saw-Whets are tame little owls; the smallest in North America.  They are between 7-8 inches (18-21cm) in length.

The last time I saw a Saw-whet was almost exactly a year ago, when one (probably the same one) was sitting in my bird feeder when I went out to refill it with sunflower seeds.  It didn’t fly away, even when I was close enough to touch it.  I got some really nice photos of it.  Yesterday’s owl also didn’t show any fear of me, but it eventually flew off.

It is always so rewarding to come upon some wild critter.  It is one of the things I love about living where I do.