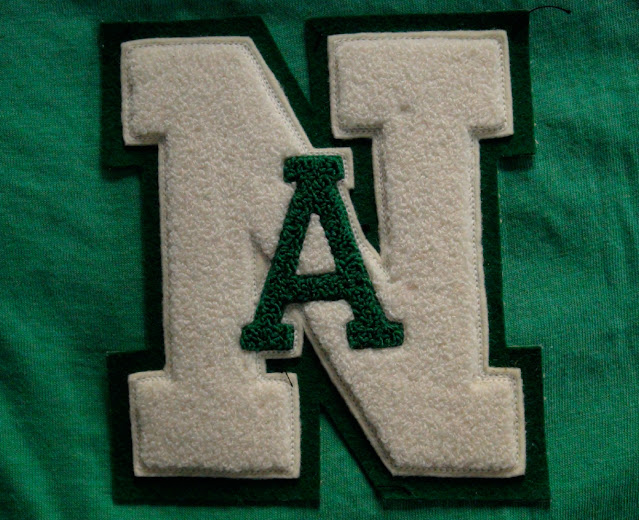 Sometime in the early 1980's, I came upon my high school “Letter Sweater”, unworn, and still in its original box.  It was a heavy duty green sweater with a big white “N” (similar to the photo above) which was given to members of the varsity sport teams at my high school.  I had been given my letter sweater for being on the track team where I was a hurdler.

This once honored item had lost its importance and had become something that just took up space after we had immigrated to Canada.  I figured I might as well wear it for warmth, so I did.  An urban hippy couple from Toronto had moved to an isolated settlement near McBride.  (McBride is pretty isolated itself).  They were a strange couple and they called each other "Y" and "R".  When I first met them, they instantly took a liking to me, because I was wearing my letter sweater and they called me "N".

One day, while I was working for forestry, I was part of a "beetle probe".  We were flown out by helicopter to a remote area of North Star Creek, (one of the tributaries of the Goat River) and dropped off.   We split up then began to snowshoe through the bush all day looking for signs of bark beetle in the spruce trees.

On this particular day, I was wearing my letter sweater, and as the day warmed up, I heated up from  the exertion of the snowshoeing along the mountain slopes.   I took the sweater off and tied it around my waist and trudged on.

Sometime later, probably when I sat down to eat my lunch which was in my backpack, I started to cool down and so I grabbed for my sweater only to discover it was gone.  It must have become untied from around my waist and fallen as I snowshoed.  I realized that I didn’t really have time to retrace my steps to find it because we had to meet the helicopter at a spot ahead of us, so sadly, my letter sweater became part of the ecology of North Star Creek, which I guess is appropriate, since the “N’ on the sweater stood for  ‘North’ High School.

I often wonder what the reaction would be if someone in the future came upon the remnants of the green sweater with a white “N” on it, out there in the middle of the wilderness.  I am sure they would be puzzled.