The Lost City of the Monkey God by Douglas Preston 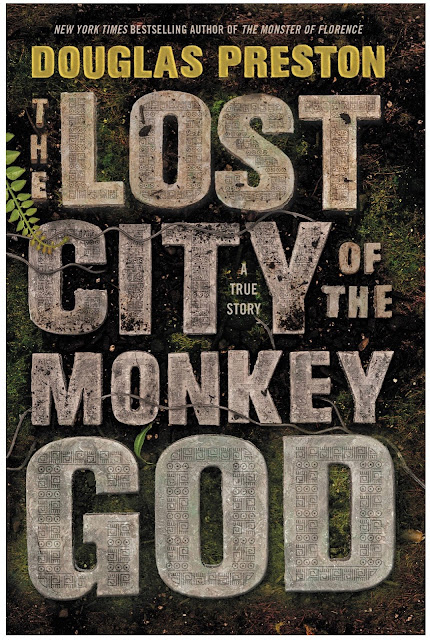 This is a nonfiction book written by Douglas Preston, who is a National Geographic writer.  It is about an expedition he was on into a remote and unexplored jungled area in the Mosquitia Region of Honduras. The expedition was mounted to check out centuries-old rumors of a wealthy undiscovered “White City” sometimes called the “Lost City of the Monkey God”.   The expedition happened in 2015.
In the past several explorers had claimed to have found the “Lost City”, but none could show any proof or map of it’s location.  This expedition was to be the first scientific based search of the area the lost city was thought to be in. After much negotiation with the US and a Honduran governments the team was allowed to use Lidar, a sophisticated and expensive radar system that, when flown over a dense jungle, could create a detailed image of the land beneath the tree canopy.
This amazing technology which shows each individual tree in the jungle, uses the tiny gaps between the leaves to map the ground. The Lidar image that resulted from the survey did indicate what appeared to be ground images that were man-made in the jungle.
The expedition itself turned out to be a horrific experience for the archeologists, explorers, writers, photographers, anthropologists, and others that made up the team. The area they were helicoptered into was an extremely dense rainforest, filled with parasites, deadly snakes, and dangerous insect pests.  It was pouring rain during most of their time at the site.
The team did find a lot of evidence and artifacts of an ancient city, but due to their short stay, they were not able to do much actual archeological digs.  Mostly they were able to confirm the existence of a previously unknown pre-Columbian civilization with possible relationship to the Mayan.
The drama of the expedition did not end with the team’s return to their home countries.   Many of them brought with them a souvenir which erupted on their skin weeks later.  It was the result of a tropical parasite transmitted to them through the bites of sand fleas.  After much investigations by tropical disease specialists, they learned they had contracted leishmaniasis sometimes called “white leprosy”.  It can cause death by eating away your face.
For some, the reaction to only known cure (a powerful and not always benign antibiotic), can destroy the kidneys or cause other lifelong problems.  Fortunately for the author, he had reasonably mild reactions to the cure, but other members of the exploration team were not so lucky.
I found the last chapter of the book extremely relevant, because it spoke of pandemics caused by agents from tropical areas that could spread worldwide and cause not only death, but to quote the Bill and Melinda Gates Foundation, could “devastate the world financially, precipitating a three trillion dollar economic collapses.  This is not fear scaremongering:  Most epidemiologist believe this will happen.”
This book published in 2017 also mentioned the now famous Dr. Fauci, head of the US National Institute of Infectious Disease, all very topical to today’s pandemic.

Check out my photo-realistic paintings:  davidmarchant2.ca