Firewood: The Many Warmings 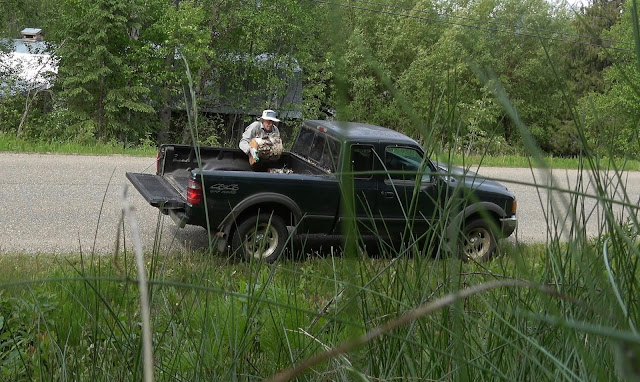 I once read a quote attributed to Henry David Thoreau, it went something like this:  “Firewood warms you twice, once when you split it and again when you burn it.”
My firewood warms me more than two times.  First when I fall and buck up the tree.  This doesn’t really work up too much of a sweat, because the chainsaw does the work and I just have to hold it in place.
The next warming is more intense:  The firewood I have been getting this year is up a steep slope across the road, so I have to pick up each piece (Birch is really heavy) and throw it down slope.  They bounce and ricochet off of rocks and other trees and all end up in different places.   After I have thrown all the pieces halfway down slope, I go down, pick each one of them up and throw them again, this time most of them land in the deep ditch beside the road.
I get the third warming by picking up the pieces from the ditch, lugging them up the steep ditch slope beside the road, trying not to slip, and put them in the back of the truck.  Once I have them all loaded (making numerous pauses to rest), I drive the truck down my driveway and stop beside the shop.  (This is the easiest part of the job)
Then I have to unload the heavy pieces (I’m sure some of them weigh 80 pounds or 35 kg), stacking them beside the shop door.  That done, I have to start splitting the bucked up pieces.  You have to split the firewood into smaller strips so that it dries out enough to burn easily.  Luckily I have an electric splitter which will split most of the birch.  Some of the thick heavy pieces that had limbs are too much for the splitter, which quits and gives up.  Those I have to split by hand using a wedge and sledge hammer.
Once I have the firewood split, I have to load it again, this time into a wheelbarrow and wheel it over to where it will be stacked until it is time to burn it in the winter.
It would be a lot easier just to turn up a thermostat on the wall and have the heat come on, but when I am not actually collecting, carrying, splitting, and stacking the firewood, I realize it gives me a lot of exercise, which is a good thing, and there is nothing quite as warming as standing by a blazing wood stove in the winter.