Under the Christmas Tree 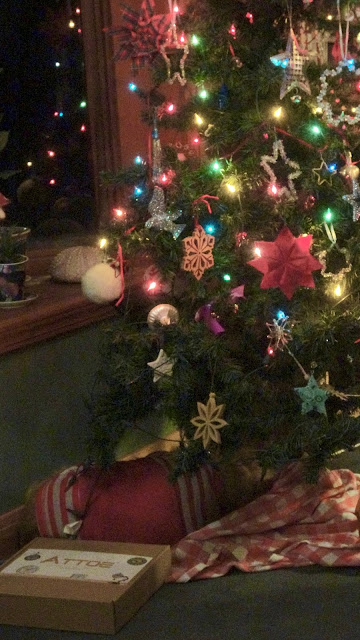 We were thrown into a bit of a panic last night when we realized we didn’t know where our dog Lexi was.  We knew she must be inside the house somewhere because the door had been shut.   As I have blogged before, Lexi often sleeps in unusual places:  on a pile of shoes, under the desk on a pile of old padded envelopes, or on top of upright cushions on the couch.  We checked all of those places and more, but couldn’t find her.
We didn’t call her because we figured she must be sleeping and didn’t want to wake her up, we just wanted to know where she was.  I was sitting on the couch and thought I heard breathing sounds behind me, so I checked and re-checked at the end of the couch and on the bay window a couple where she sometimes sleeps, but didn’t see her.  When I heard the breathing sounds again I checked for a third time and finally saw her under the Christmas tree.  She was wearing her red striped shirt which blended in the red and white checkered blanket covering the base of the tree.
I have no idea why she chose that particular spot for her nap, but she seemed pretty contented snoozing away there.