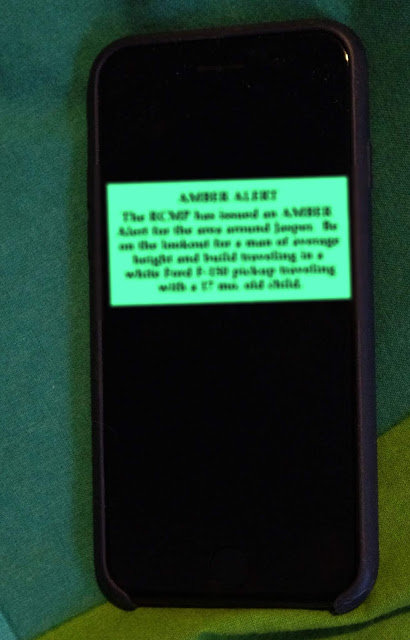 If a child disappears or is kidnapped, an “Amber Alert” is sent out to all cell phones in that area in hopes that someone will see something that might help the RCMP (Royal Canadian Mounted Police) in finding the child.  The most obnoxiously terrible noise you can imagine blasts through the phone to get your attention and the alert message appears on the screen.
Months ago such an alert when out in Ontario in the middle of the night, which awoke many people who were sleeping.  There was much criticism about sending out an alert while most everyone was asleep.  It did sound like a questionable move by the police to me and I wondered how effective it was.
Well a similar thing happened to me the other night.  I was sleeping deeply and at 2:45 AM, my cell phone which was laying on my nightstand, screamed out the obnoxious sound of the alert and my phone lit up with a message.  Mostly asleep, I automatically groped for my phone to see what the message was.
Upon peering at the very bright screen in the dark bedroom, I rapidly discovered that I could not read the blurry message without my reading glasses, so as I felt around on the nightstand for my glasses with one hand, I swiped the alert screen with a finger from the other hand, (something I do to read a text message).  However, when I swiped the screen, the alert message totally disappeared from the phone.
Once I had my glasses on and my room light turned on, I tried to search through the phone to see if I could find the message somewhere.  I couldn’t.
So I was awakened by the noise and light from the alert, but I had no idea of what it was about, and there really wasn’t any way of finding out.  The emergency system didn’t seem to be very efficient to me.
The next morning while listening to the radio, I heard that an amber alert had been sent out in Alberta (I live in BC) about a young boy who had been kidnapped by his father.  Later that day the man was caught and his young son was okay.
Because Alberta is just over on the other side of the mountains, emergency messages bleed over and for some reason come to my phone.  I don’t think that happens to everyone in McBride, but on tests of the system I always get the test from Alberta, and then an hour later, the test from BC.
I still question the value of sending out an amber alert in the dead of night.  Surely announcements on the radio and TV stations would suffice, since most everyone else is sound asleep.