Sweetheart of the Rodeo-An Album That Opened My Eyes 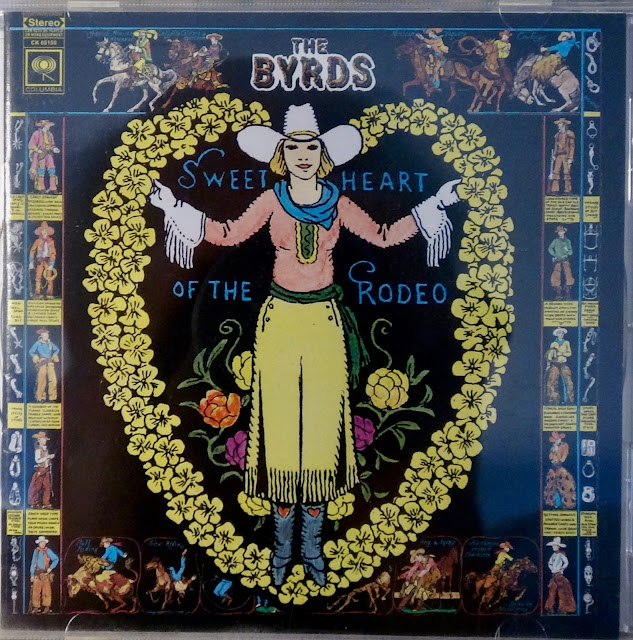 I have had a lot of music go through my ears during my lifetime, but one of the albums I still love after I first heard it 51 years ago is “Sweetheart of the Rodeo” by the Byrds.  I was a big fan of The Byrds years before they released Sweetheart of the Rodeo.  I loved their tight harmonies, the chiming electric 12 string guitar, and the whole folk rock genre they had introduced back in 1965.  “Mr. Tamborine Man” and “Turn, Turn, Turn” became Top 40 Hits, but I also loved their lesser known songs as well.
They were a group that couldn’t seem to stick with what they had already achieved.  From their “Folk Rock” period, they ventured into into “Psychedelic” rock with “Eight Miles High” (which was actually about an airplane flight) and “Fifth Dimension”.  Whatever kind of music they drifted into, I followed along, but then in 1968 they released “Sweetheart of the Rodeo” where they unexpectedly ventured into “Country”  music.  Had I known it was full of “Country” music I would have been frightened.
Back in those days there were really distinct cultural differences between rock fans and country fans.  I had a strong dislike for the sappy tear-jerker country music that couldn’t be avoided where I lived in Southern Indiana.  I was not a fan.  I did though like the older country music, and really liked Bluegrass.
I bought “Sweetheart” because it was the latest Byrd album, and put it on the turntable.  The Byrds must have arranged the songs in the album to slowly seduce me.  It started out with the Bob Dylan song, “You Ain’t Going Nowhere” and since I was a big Dylan fan, I loved it, even with the heavy steel guitar.  Then the next track was “I Am A Pilgrim” a bluegrass song with fiddle and banjo, of course I liked that one too.  Slowly the tracks on the album slid into more pure country, but by then I was hooked.  They still had their beautiful vocals, strong rhythms, and I was beginning to love the steel guitars.
“Sweetheart of the Rodeo” really changed my view of country music.  Some of the songs feel like they are “tongue in the cheek” because of their severe “heartbreak”  and “Honky Tonk” sentiments, but the music is rhythmic and beautiful.  The studio musicians were Nashville regulars.
When they began to record the album, the studio steel guitar player told them that he usually just would come in and play at selected spots on a song, then he asked when he should play on their songs.  The Byrds told him just to play all the way through the songs, which made the steel guitar player very happy.   The Byrds even got to perform at the Grand Ole Opry, but despite their music the appearance of “Hippies” turned off the Opry fans.
“Sweetheart” is still a solid and relevant album that still holds up fifty years later.  It is listed in Rolling Stone’s Top 150 Albums of all Times, and is one of my all time favorites.  I have introduced our Tuesday night jam to many of the songs from the album (“You Ain’t Going Nowhere”, “Hickory Wind”, “You’re Still On My Mind”, “You Don’t Miss Your Water”, “I Am a Pilgrim”, and “The Blue Canadian Rockies”.
If you subscribe to Apple Music or Spotify, you should give “Sweetheart of the Rodeo” a listen.