A Day in Valemount 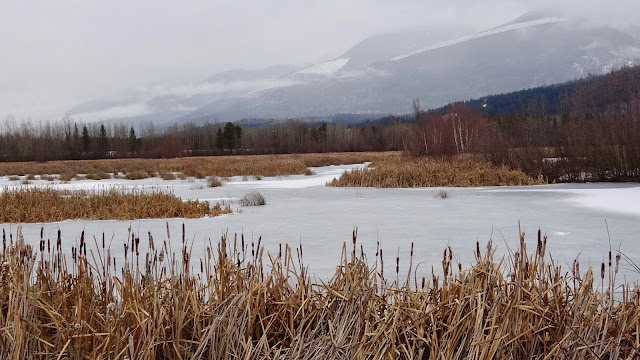 I didn’t sleep very well Monday night.  Lexi has swellings around her nipples and whenever an old dog is spayed, it is quite common for breast cancer to develop (Who knew?)   The vet  who comes to Valemount from Jasper two days a week, was scheduled to remove the tumors on Lexi yesterday.  Beside the personal mini-trauma caused by the operation on our dog, there were snow warnings out on the eastern leg of our drive.
We didn’t know if we should cancel the vet appointment because of the dangerous driving, or just grit our teeth and make the drive.  We weren’t sure if the vet would be able to arrive in time for the early morning procedure because of the snow, and we couldn’t really communicate with anyone to find out.  In the end we decided to make the one hour drive.
As it turned out, the weather wasn’t nearly as bad as what I expected from hearing the predictions on the radio, if fact, Valemount didn’t really have any snow falling at all.  The vet was there on time.
We dropped off Lexi at the Vet’s, then had to figure out what we would do for the next five hours.  First we went to A & W for some breakfast.  They feature a plant based sausage/egg breakfast sandwich (I am really like the taste of the plant based “meats”).   Once we had eaten, we visited with a friend who had just had a house built in Valemount.  We were impress with the attractive dwelling she had built.
After that visit, we did a hike at the Cranberry Marsh Bird Sanctuary (above), but of course there were no waterfowl to be seen this time of year.  After the hike it was time to eat again, so we returned to A & W and had one of their Beyond Meat burgers.
We still had a lot of time to kill before we could pick up Lexi, so we went to the Valemount Library.  I had planned to take the book I am reading along for the day, but had forgotten it at home.  Luckily the library had the same novel, so I was able to just pick up reading where I had left off in the book.  I got two chapters read before it was time to return to the vet’s.
Lexi was still pretty drugged-up when we picked her up.  She feels and looks pretty miserable and was making her high pitched moan from the pain.  She slowly seemed to feel a bit better toward nightfall.  We are going to have to keep a close eye on her so she doesn’t do something to strain her stitches.
It was a long and stressful day, but fortunately I had our music jam Tuesday night and that got rid of the stress for me.