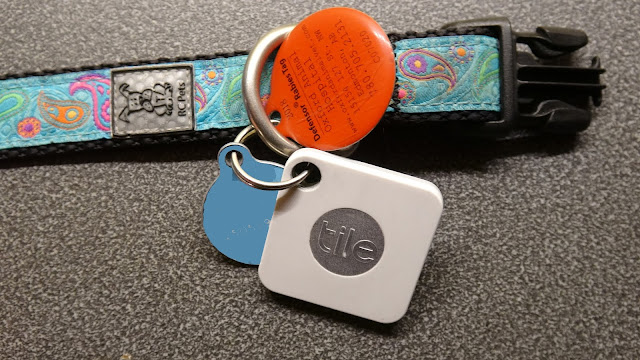 Let me start out by saying that if I recommend or say something positive about an item on my blog, it is because it has really been helpful to me and not because of any financial gain for me.  That being said let me put a little praise on Tiles.  See the white square thing in the photo, that is a Tile, and I think it is an amazingly helpful technology.
Several years ago I saw a small article in some magazine that told about developers who were trying to create a small thing called a Tile, that would allow people to track down something they had misplaced.  They were doing some crowdfunding.  In return for I what I think was $60 they would send each investor one of the Tiles they were trying to create.
Since my wife was always misplacing her keys, I sent them the money and waited for them to create the thing.  They did finally get the Tile developed and I gave it to my wife.
Here is what it does.  You put the TIle on something that you want to keep track of:  your keys, your bicycle, or maybe your dog.  If that thing goes missing, you can open an app and if it is far away you are shown a map with a dot indicating where it is.  If your lost item is close, it shows a target-like image with colored rings that enlarge as you get closer to the lost item.  You can also press a button on the app to  make the tile chime, which helps you find it.
The other day my wife couldn’t locate her wallet which luckily had a tile on it.  She got out her phone, opened the Tile App, and saw that her wallet was somewhere fairly close.  By moving around in the house and watching the circles enlarge or shrink, we finally found the wallet in a closet.  We couldn’t really hear the chiming because it was inside her purse, but the circles were enough to find the wallet.
Below you can see the app and the circles.  The price of a tile has dropped a lot since I got that original one. 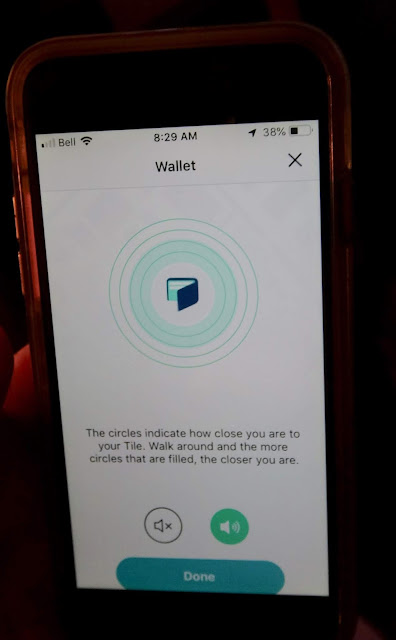