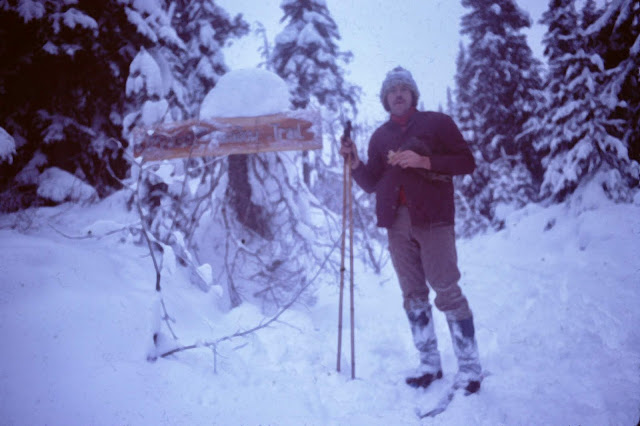 Continued from yesterday:
It was a sparkling clear and sunny winter's day. I was dazzled by the strikingly brilliant rainbow of colored clothing worn by the skiers as they practiced their stride in the field out in front of the Ranch of the Viking Lodge. Then I was struck by a thought: these skiers are all wearing skin-tight Spandex racing clothes, and there are a lot more skiers here than Fern had led me to believe. A mild tremor, (3.0 on the Richter Scale) rumbled through my self confidence.
That was followed by a Richter Scale 4.3 after-shock, when I took notice of all the skiers in the parking lot with torches and little irons, applying different colors of wax to different sections of the base of their skis. I found this quite interesting, since I had never seen ski wax before. I thought it curious that a person would spend so much effort putting wax on the bottom of a ski, when they could easily buy a pair of  "no wax" skis, and just be able to "Snap them on and go.”
I found Fern, who once again said, "Good for you, Dave", and added that they would be starting racers "one at a time, with a 10 second interval in between each racer”. She had already registered me in the Adult Male Category, and all I had to do was check in.
An announcer called out that all racers should get into line according to their category. The Adult Males were to be started after the Teenage Males and they were to be followed by the Jack Rabbits, which was a club of little kids that were just learning to ski. I took my place in the line and was surprised to discover that there were at least 10 other Adult Males, all of which were wearing colorful aerodynamic body suits. My confidence continued to implode.
The moment of truth was rapidly approaching as the Adult Males slowly inched nearer to Al, the local pharmacist, whose job it was to start each racer. I thought that maybe I should come up with some kind of race strategy, and this is the strategy that I came up with: I would ski as fast as I could around the field in front of the Ranch of the Vikings Lodge, and then once the trail entered the bush, out of sight of the spectators, I could slow down to my normal ski pace and enjoy the race.
Before I had a chance to critique my strategy, Al yelled, "GO!", brought down his hand, and I shuffled off down the track, as fast as I could, along the edge of the field. I hadn't gone more than 75 metres when I heard a voice behind me yell, "Track", I wondered what he meant, then he shouted louder, "TRACK". I got the distinct feeling that he was upset with my speed and wanted to go pass me, but he didn't seem to want to get out of the set track himself to go around me, so I stepped off the track to let him by.
"Get off the track when some yells,'Track'," he told me as he whisked by me. I am a quick learner, and by the time the remaining Adult Males had passed me, I was reacting to the "Track" signal, like a veteran skier. I was beginning, however, to suspect a flaw in my race strategy. I was only halfway across the field, and my body was already sending me signals of an eminent collapse.
My heart was pounding, my legs were screaming, and my throat felt raw from the rapid breathing. I couldn't maintain this “sprint-like” pace too much longer. It was better that I gear down a bit and endure some ridicule rather than to expire in the middle of the field, so I slowed my shuffle, and after what seemed like a week and a half, I finally made it to the cover of the willows and alder.
I immediately reduced my speed again and continued along the twists and turns of the trail through the brush. At least now, I could nurse my ego back to health and enjoy the race. Then, once again from behind me, came the "track" command, this time in a higher octave. I instinctively stepped aside, and let the diminutive gang of child “Jackrabbit” skiers zoom by. I took solace in the thought that at least there was no “Infant” Category in the race.
The race will continue on tomorrow's blog.

I paint a lot better than ski: check out my paintings at:  davidmarchant.ca