The Peculiar Life of the Lonely Postman by Denis Theriault 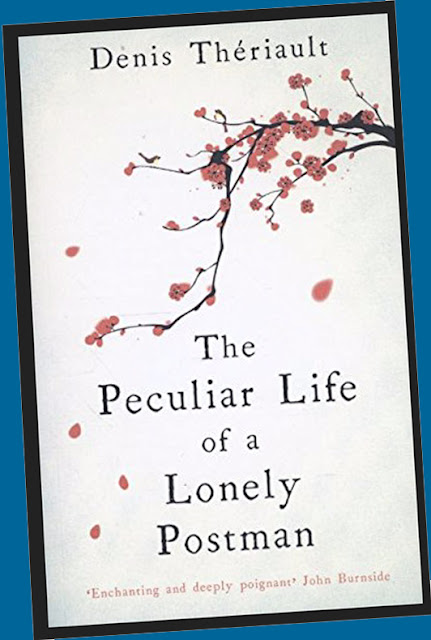 The Peculiar Life of the Lonely Postman by Denis Theriault
This was a strange tale of a postman in Montreal who began following the relationships of some of his mail recipients by steaming open their letters, reading them, then re-sealing them before he delivered them.   He became especially enamored with the letters of a pretty young school teacher who was writing to an strange unkept man.
The more letters he read of this young woman, the more he fell in love with her. The correspondence of the woman and man was largely an exchange of Haiku poetry, that they both wrote. The postman who was unfamiliar with Haiku, soon came to appreciate the form, love it, and even write it.
When the postman saw the man who was running across the street to post a letter get hit by a car, and killed, he decided to secretly take his place, by writing his own Haiku to the woman.  He did this so he could continue reading the letters and Haiku from her.  In his desperate attempt to keep the death of her pen pal secret, he toils at writing Haiku, until he becomes proficient in producing the Japanese poetry.
He succeeds, and he takes over the long-range relationship, which intensifies in both of them.   As you might guess, just as things are going so well for the postman, something occurs that threatens it all.
This strange tale concludes with an even stranger ending.
The novel is very short and full of interesting Haiku. It was a nice change from the books I normally read.


Visit davidmarchant.ca to view my photo-realistic paintings.
Posted by Life in BC's Robson Valley at 10:00