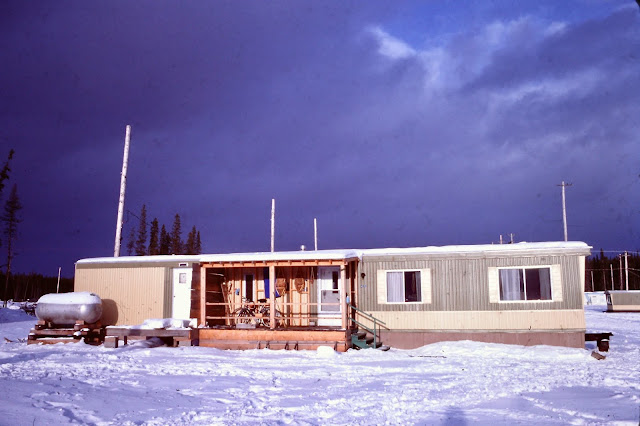 In 1973, I had been hired by the Ft. Nelson School District to start an elementary school in an isolated logging and mill camp along Takla Lake.  The Ft. Nelson School District was huge, taking up about the upper third of the very big Province of BC.  I had been hired over the phone and I never actually met any of the School District people, because of the huge distances that needed to be travelled.
Sometime during my first year of teaching the school district boundaries were re-drawn and I found myself suddenly working for the Vanderhoof School District, which was relatively closer to where we were. The Vanderhoof District promised that for the following school year, they would send us a school building (I had been teaching in the camp’s recreation hall), and they would also send us a mobile home to be used as the teacherage.
They were good on their word, and the photo shows the teacherage where we lived during the second and their year of the job.  Over the school’s summer break while we were away, the teacherage, and “portable” building for the school were moved in and set up, and were ready for us to use when I started school back up in September of 1974.
The new teacherage was a brand new mobile home, so all the appliances worked (we suddenly had a washer and dryer, so didn’t have to use the one in the bunk house), and the new teacherage tripled the amount of living space we had.  It was a very comfortable and spacious change.  One disadvantage was it was situated in a new location in the camp, adjacent to the mill, so we did get a lot of extra noise, and an industrial view, every time we looked out our side windows.
We really felt like we were moving up in the world, living in the brand new teacherage.