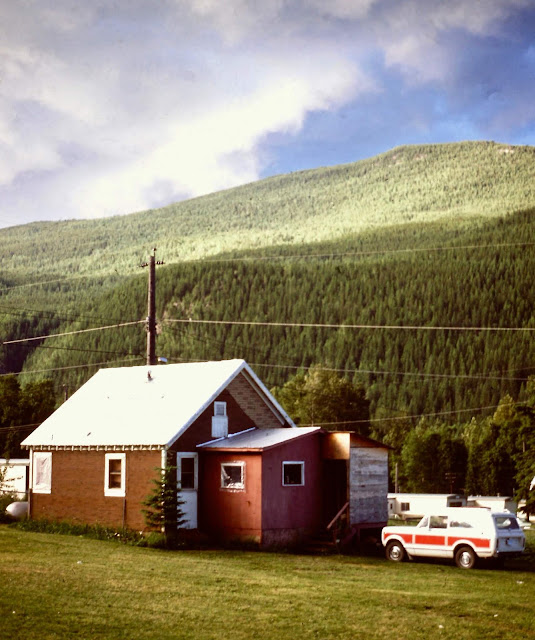 After three years of living and teaching in the one-room school in the logging/mill camp near Takla Lake, we found ourselves suffering from “cabin fever.”  The only time we could leave camp to go into the outside world were during the school’s summer vacation, Christmas break, or Spring break.   Our mail delivery was erratic, radio reception was rare, television reception was non-existent.  We sought a more normal life.
Having decided to quit the job at Takla Lake, I looked over the list of schools that needed teachers for the upcoming year, and was able to get a job in the very tiny highway community of Avola.  Because I was still in camp and had never been in Avola at the time the job was offered, all I could do was to look on a map.  It seemed like it might be okay--at least it was on a highway, which meant we could go places on the weekends.  It was reasonably close to Wells Gray Provincial Park and Jasper National Park, so that was a plus, and it seemed to be in the mountains, so I accepted the job.
The Avola teaching job would be in a two-room school, and would include a teacherage.  Like my first teaching job, I didn’t really know exactly what to expect as we first approached.  It was not an uplifting arrival.  It was pouring rain, and the “mountains” were not jagged peaks as I had imagined, but rather treed, rounded hills, that cramped a narrow valley, thus blocking out a lot of sky.
The teacherage (above) was a small little house that sat right in a corner of the school yard.  It was adequate, but not very appealing.  There was no washer or dryer, so we ended up having to drive 40 miles (one way) to Clearwater to do our laundry and grocery shopping each weekend.
The community itself was a disappointment to us.  It was made up of loggers and truck drivers.  The only residents we could relate to was a retired old socialist man and his wife who owned a small “hobby farm.”  I was also disappointed in the students in the school.  They possessed a lot of discipline problems, very little motivation, and not normal kid behavior. These were the first students I had run into that didn’t go out at recess to play.  They just stood around.  I had to start some kind of game to get them to do some physical activity.
I finished the school year, but I couldn’t wait to get out of Avola, and resigned after that one year.
You can take a look at my paintings:  davidmarchant.ca