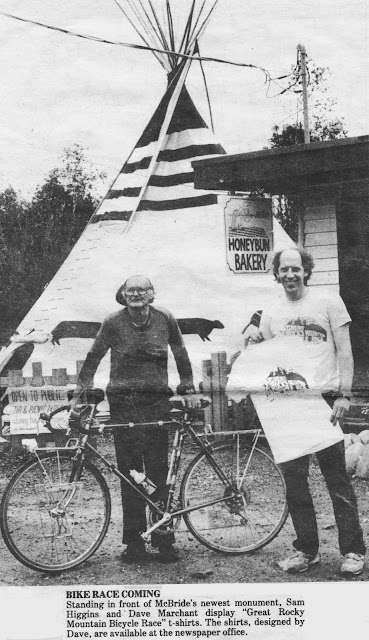 The other day Joan was handed an old newspaper from 1985 that featured a photo of me and an article about the Great Rocky Mountain Bicycle Race that used to be a local event.  The photo reminded me of a story I had written about the time I participated in the big race.  Here it is:

I am not a jock, I am not even close. I am a middle-aged civil servant who hasn't been on a bicycle two times all year, so what was I doing on my wife's 3-speed, 50 miles from the finish line?
I can offer 3 possible explanations:
1. Some of the things I do make me think I must be a masochist.   2. I really wanted one of those Great Rocky Mountain Bicycle Race T-shirts and I didn't really feel right about wearing one if I hadn't been in the race.   3. I'm a sucker for lush mountain landscapes, and how better to experience the Robson Valley than on a bicycle.
On the bus that took the participants from McBride, B.C to the starting line in Mt. Robson Provincial Park, I made a mental note of every river valley we crossed, and wondered what it was going to feel like to pedal up each one. Even though I had seen Mt. Robson many times, I couldn't help being impressed again, watching it as I gave my wife's 3-speed a last minute road test before the start of the race.
I noticed that the individuals preparing their bikes could be divided up into 2 distinct groups. First, there were the hardcore racers. They had the sleek l0-speeds with those little metal cages on the pedals so they could pull the pedals up with their toes. They were wearing the gloves, helmets and colourful skin tight clothes. One of member of this group which caught my eye, was girl from Jasper in tight black racing pants. It would be nice to keep up with her!
I will call other group of participants “tourists”. I was a tourist. There was nothing extraordinary about our clothes, and most of us were happy just to push our pedals down and let them come up by themselves. Tourists weren't there to win the race, just to finish. We were there to partake of the fields, mountains, and the experience.
The gun went off. There was a flash of spokes and the whirr of changing gears. The mass of bicycles and humanity that had surrounded me quickly metamorphosed into a single thread of colour, stringing its way up Highway 16 toward the Mt. Terry Fox viewpoint. I never saw the girl in the tight black racing pants again.
As the horizontal pavement became more vertical I  shifted down into low gear and began to contemplate the reality of 80 km on a bicycle. Before I had finished this contemplation, l found myself on top of the  viewpoint with the highway snaking downward past Rearguard Falls and along the Fraser River, and I was alone.
If I couldn't win this race with my muscles I would  have to use my brains. I shifted into normal gear. I was going to take full advantage of this down slope. I bent as low to the bicycle frame as I could to cut down on the wind resistance. I shifted into high. I was going to push this 3-speed to the hilt.
To my dismay, I discovered that I was going down hill at such a high speed, that my legs couldn't pedal fast enough to catch up with the gears. After the struggle I had to gain every inch coming up the hill, I certainly wasn't going to give up an inch going down, so despite the speed, I refused to put on the brakes. I just aimed the bicycle downhill and enjoyed the wind in my face.
My hard work and keen strategy did enable me to catch up with 2 other "tourists". Several times I nonchalantly quickened my speed in a sly effort to overtake them, but they always nonchalantly quickened their speed and managed to keep me in my place.
I felt like a real racer each time I approached a refreshment station and grasped a carton of apple juice from a helper as I streaked by; Both refreshment stations and landmarks were flying by me now: Tete Jaune, apple juice, Small River, orange juice. Horsey Creek, a cup of water, on & on. I had the Cariboo Mountains on my left and the Rocky Mountains on my right, McBride and the finish line 35km in front of me and the official race "follow-up" truck crawling in 2nd gear immediately behind me.  What a feeling of security.

The story continues in tomorrow’s blog.