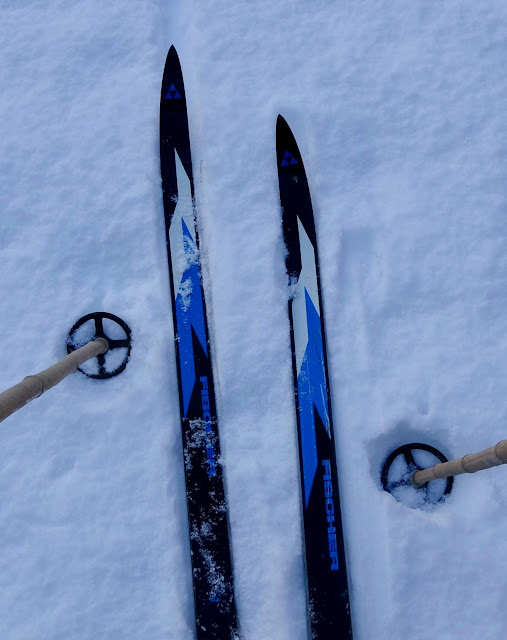 Surely now, my troubles were over. I rounded a corner and discovered to my dismay, that the trail headed straight up the base of Bell Mountain. This was the steepest incline I had ever  encountered in my short skiing career, but I didn't panic.    Everyone else, even the Jackrabbits, had evidently made it up the slope, so I tried to think good thoughts, and I began the climb.
It was extremely difficult to achieve any gain in elevation without loosing it in a back slide. The slope seemed to be too much to cope with for the little grooves on the bottom of my "No Wax" skis, which gave up their grip each time I tried to advanced a ski forward. I knew how to herringbone up a slope, but there was no evidence that anyone else had used the technique to climb the hill, so dammit, neither was I.
Instead, I developed my own climbing technique, I call it the " pull and prop" method. Here's how it works: you advance one ski forward, then using that side’s pole as a prop, you pull that side of your body forward until your weight is over that ski, while at the same time your other arm uses every remaining ounce of strength to brace against a back- slide with the other pole.
I successfully pulled and propped my way halfway up the slope, then I was forced by exhaustion to stop to allow my arms and shoulders to recover. Unfortunately, it only took a second of relaxation of my prop arm, for the pull of gravity to send me rocketing backwards down the slope, until one of the back ends of my skis dug into the snow, causing me to somersault backwards, which continued until I finally came to rest in a tangled pile at the bottom of the hill.
I had to take off my skis to get back into the standing position again.  I brushed the snow from my clothes with my toque, snapped the skis back on, and herring-boned up the hill. I was beginning to seriously question the sales pitch I had been given about "No Wax" skis.
The trail leveled out at the top of the hill and the vegetation changed from  brush to a dark cedar and spruce forest. I plodded along and for the first time during the race I was enjoying the scenery. Several times the trail forked, there was no signs or persons to give me direction, so I just chose what appeared to be the most travelled fork and proceeded through the forest. It seemed I was alone in the universe, but I was happy to have the solitude and quiet.

After a brief period of pleasant skiing, the snow on the trail started to become more and more icy. Then the ski trail suddenly took an abrupt turn to the left and plunged steeply, straight down the hill, sharply veering to the left when it confronted a large cedar. This didn't look good, but, there was no way I was going to go back the way I came, so my only option was to go down this slope.
My brain, in an obvious attempt to save itself, sorted through all its past information and came up with a plausible solution to how I could get down the hill-- Snowplow!
I had read in the "How to Cross Country Ski" booklet about how you could slow and control your speed going down hill by spreading your legs apart, putting the points of the skis together, riding on the inside edges of your skis, thus pushing snow in front of you instead of gliding over the top of it. I would just snowplow down this hill. Full of confidence, I pushed myself over the edge.
It took about a nanosecond for me to reach the speed at which I decided I'd better start to move my skis into the snowplow position. As I careened down the  slope, I watched in fascination as my legs parted and the tips of my skis slowly and carefully moved together, while skating over the ever accelerating ice which was moving, ever faster, under them.
I raised up onto the inside edges of the skis, but because of the icy track, I was plowing no snow. I was moving more and more rapidly down the hard packed slope toward the grandfather of all cedar trees.
It seemed an unjust world that offered such an ignoble end to one who was willing to sacrifice a Sunday for his community and the Adult Male Category.  I decided rather than take the cedar tree with me INTO THE VOID, I would veer off to the side of the trail and sacrifice only myself, but before I had a chance to determine my own fate, the back edge of my ski caught up in a downed branch anchored in the snow, and for the second time during the race I was somersaulting down a hill, although this time I was going forward.
My speed was slowed by brush and deeper snow along the edge of the trail and I came to a twisted stop just to the right of the mighty cedar. I remained in my sprawled position for a moment, amazed at the physics of rolling down a hill at great speed with a 2 metre ski attached to each foot and a bamboo pole flailing wildly from each hand. It seemed a miracle that I was unhurt.
Not wanting to push fate too far, I took off my skis and walked down the rest of the hill to the flats. I put the skis back on and shuffled down to where the trail leveled off and snaked through another stand of willows and alder. The trail made a left turn and I could see through the brush that I was about to enter the field again for the final leg before the finish line.
Upon entering the field, I my spirits were lifted when I realized that the crowd of onlookers had vanished. Good, I thought, I can just quietly ski across the field, and finish the race without drawing attention to myself. With a bit more confidence, I made the turn and started across the open field.
"There he is", someone shouted. Then a small crowd of people I hadn't noticed all turned their eyes toward me. Some kid from the crowd began to ski toward me.
"We were just getting ready to send a search party out to find you. What happened? Did you get lost?" he asked.
"No," I replied, "I was just taking my time and enjoying the scenery.
"The timekeeper and most everyone else has already gone home," the kid volunteered.
"That's okay, I said, "I was just skiing for the fun of it.”
The small group of people politely clapped for me as I passed over the finish line thus ending my first and last ski race.