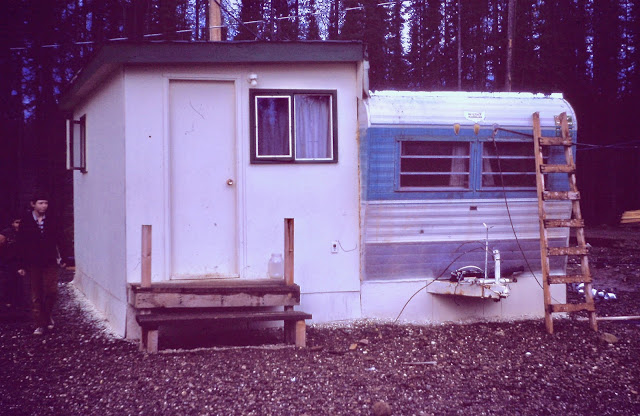 Back in 1973 I didn’t know what a teacherage was, I had never even heard the word before.  It is not a common word, and even now as I write this blog, every time I type “teacherage” into my computer, the spell-check underlines it, because it doesn’t know what it is either.
A teacherage is a living quarter provided for a teacher to live, usually in out of the way places where there aren’t other accommodations available.
Joan and I were trying to immigrate to Canada in 1973, and the only way we would be accepted was to find a job that no Canadian wanted.  I had a degree in elementary education, and wrote to many school districts across the province seeking a teaching job.  It got to be the beginning of September (and the school year) and I still had no offers.
At the time we were staying with relatives of relatives in Victoria, BC, when suddenly I got a phone call from the Superintendent in the Fort Nelson School District.  There was a logging camp and mill that wanted to start a school, and couldn’t find a teacher. He went on to explain, it was at a very isolated place in the Interior of British Columbia beside a big lake, without any access by road, only by plane or rail.  The mill  would provide a “teacherage” for the teacher to live in, if a teacher could be found.  Would I be interested in the job?
It was exactly what I needed; a job no Canadian would take.  I was happy to accept the position, even though I had no idea exactly what I was getting us into.
The photo shows what our “teacherage” looked like.  It was an old small camping trailer, with a “mud room” (another term I was unfamiliar with) built on.  That was where Joan and I lived through our first Canadian winter.
It didn’t provide us with a lot of living space, and one winter’s morning I found that the top blanket of our bed, which was touching the wall, was frozen to the wall, but we were young and adventurous, so we survived the winter in good spirits.  The teacherage was provided to us without cost, so we were able to save a lot of money during this first year of teaching.
Another big advantage to this particular teacherage was that it’s refrigerator and stove didn’t work, so the logging camp said we could eat with the workers at the cookhouse.  Wow, what a benefit that turned out to be.
One of the enticements that these isolated camps have to get workers to work there, is to provide really good food, and lots of it.  Joan and I got to eat all of our meals at the cookhouse.  It was like going to a buffet three times a day.


See my paintings at:  davidmarchant.ca
Posted by Life in BC's Robson Valley at 10:27