Digging Out The Car 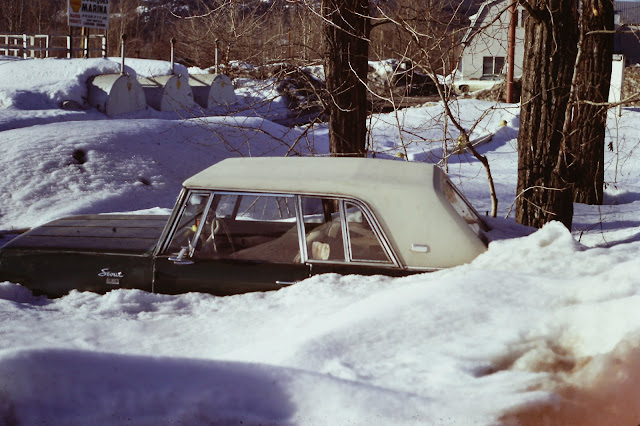 In 1975 I was a teacher in an isolated one-room school that was located in a lumber camp on Takla Lake, with no roads into the place.  In September of that year in order to get to the school we drove to Fort St. James to the offices of Northern Thunderbird Airlines (NT Air) for a flight into the camp.  I asked them if I could park my International Scout somewhere until Christmas, when we would be flying back out of the camp for our Christmas Break.
They gave their consent and directed me over to an area where our car would be out of the way.  I parked it, we unloaded our possessions, got on the plane, and off we flew for the next 4 months.
When Christmas finally came, we were eager to get out of camp and be back to civilization.  We caught the “Sched” (the nickname given to the daily flight NT Air made to the camp) and flew back to Fort St. James to get our car for our drive back to Indiana for Christmas.
We were a bit shocked when we saw our car.  The snow had been piling up around it for months.  The people at NT Air were nice enough to load us some shovels so we could dig the Scout out.  After a vigorous workout with the shovels, we finally managed to clear enough snow out from around the car so that we could drive out.
I ended up having to pull out the spark plugs and clean them before the car started, but once the car was running we packed it with our supplies, and we began the long winter drive to Indiana.