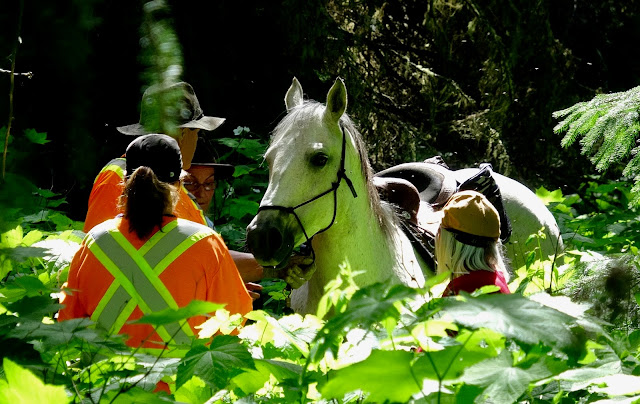 Pete from Dunster puts out an email every day with notices and things to sell.  In the middle of June there was an urgent message on the email about a missing horse, who apparently bolted from the owner and ran off into the bush.  The horse was wearing a bridle and saddle when it disappeared.  This can be dangerous since those things can be snagged by branches and can trap a horse in the bush.
The owner was asking people to be on the lookout, but she also requested help searching through the bush for the horse.  After a week, the daily emails continued to be posted, so on a Saturday, I thought I would join in on the search for the horse.  Searchers had scoured the bush, looked from airplanes and drones, but were never able to spot the missing horse in the thick bush.
I arrived at the gravel pit where about 7 others had gathered to help look for the horse.  I had a compass so I took a group of 4 others and we ran a couple of probes through the bush down toward the Holmes River.  That area had been searched days before, as had most of the other areas surrounding the point where the horse disappeared.  Our two searches turned  up nothing.
We were about to start a third probe, when a local came by with his van and told us the day before he had done a search across the highway and thought he smelled a horse, but didn’t find anything.  I suggested we try over there since we were not accomplishing anything where we were.
We walked across to the bush across Hwy. 16.  We found an old grown-in skid trail and went down it.  I finally suggested, without any reason, that we stop and run another probe from this point, down to the river.  My group spread out and we started making our way through the thick brush.  After about 15 minutes, one of my group called out, “There she is,” and sure enough the lost horse was there, walking toward us, happy to be found.


It warmed the heart to see the the reunion of the missing horse with its worried owner.  I was happy that I had taken the time to help out and that our group had been successful in finding the lost horse.

As always, you can see my paintings at:  davidmarchant.ca
Posted by Life in BC's Robson Valley at 11:07