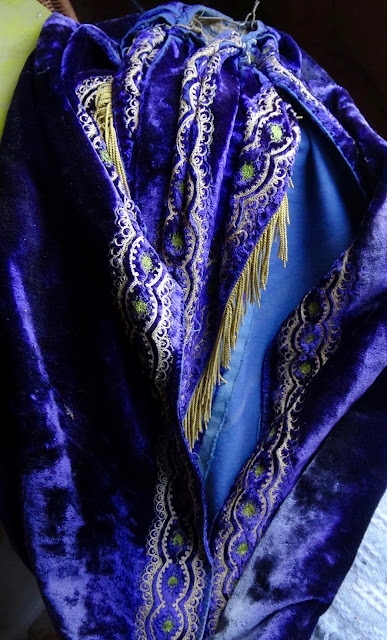 Last week I was in the Thrift Store and ran into Bob Thompson, a local actor.  I asked him if he was looking for interesting clothes for future plays.  He told me he always keeps an eye out for clothes that might be used in a drama.  The exchange made me think back on the old theatrical costumes that I have had in storage for decades.
During the Vietnam War I spent two years working in the Indianapolis Goodwill store as a conscientious objector.  A Goodwill Store is an interesting place to work, because every day a new load of items come in and among them one can find some really unique things.  One day a load of old Shakespearian-type costumes arrived.
They were amazing to see.  They were made of heavy velvet, very colorful and intricate, although quite worn.  The fact that they were so well made and fancy made me think they were old and professional.  I couldn’t help but wonder where and how they were used.
I was so fascinated with them I bought two, and although I never have had an opportunity to use them, I have kept them for over 45 years, and even brought them with me when we moved up to Canada.
The photo above shows a cape.  Below is a photo of a jacket with cape attached. 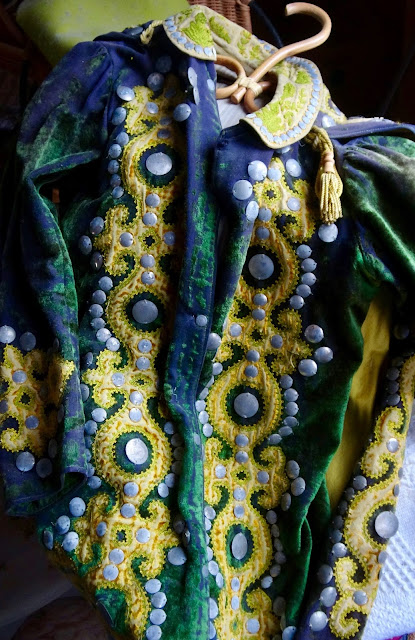 You can check out my paintings at:  davidmarchant.ca