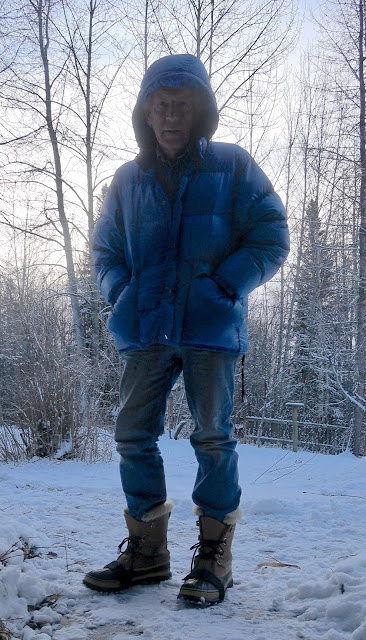 When we first moved to Canada we were totally unprepared for the Canadian winter.  We had the winter clothes that we had brought with us from the midwest United States and that is what we wore.  We were living in an isolated fly-in logging camp in the Interior of BC and there was no place to buy other winter gear and so we wore what we had.
I especially remember our footwear.  We wore rubber boots, (“gum” boots, or “Wellingtons” as they were called here).  We ordered some hiking boots through the mail, but they weren’t insulated and so we suffered from cold feet throughout that winter.  It several times got down to -40 (the same temperature in both Fahrenheit and Celsius) during that winter.
I had an old leather bomber jacket I had gotten at the Goodwill Store when I worked there.   Joan wore her felt duffle coat and underneath we both wore sweaters.
We kept our eyes open as to what other people in the camp wore, and the first time we had an opportunity to get Canadian winter gear, we did.
We bought down coats with hoods.  The BC Interior has what is called a “Dry” cold which is much more benign that a damp cold and down coats were perfect.  They are light and very warm.
For footwear, we bought ourselves “feltpacks”, boots that have a thick removable felt insert that goes up to the top of the boot.  The first time I wore mine outside in the cold, I couldn’t believe it--my feet stayed the same temperature.
The reason I am telling you all this is because the other day when I was walking around outside, I realized I was wearing exactly the same thing as I wore back in the 1970’s and 80’s.  I mean “exactly.”
I found an old Pioneer down coat, (the same old brand as my original) in the McBride Thrift Shop.  I’m pretty sure the company no longer exists, but I always loved my old coat.
The feltpacks I am wearing are exactly the same type I wore 40 years ago, leather uppers with the fake-fur border around the top.  I’m not sure if they make them like that any more either.   I found this  practically brand new pair at a yard sale several years ago.
Joan will probably tell me that wearing the same clothes that I wore 40 years ago is nothing to brag about, but obviously I am not a “clothes horse” or “A Dedicated Follower of Fashion” (to quote the old song by the Kinks), but these clothes work, they were cheap, are comfortable, and keep me warm, so why change. 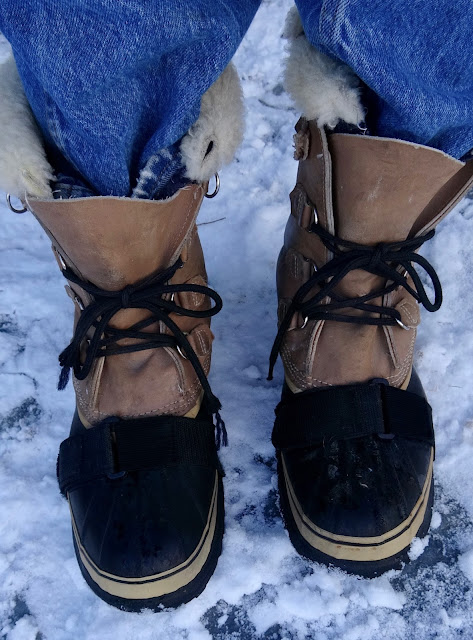