On the Chicken Bus 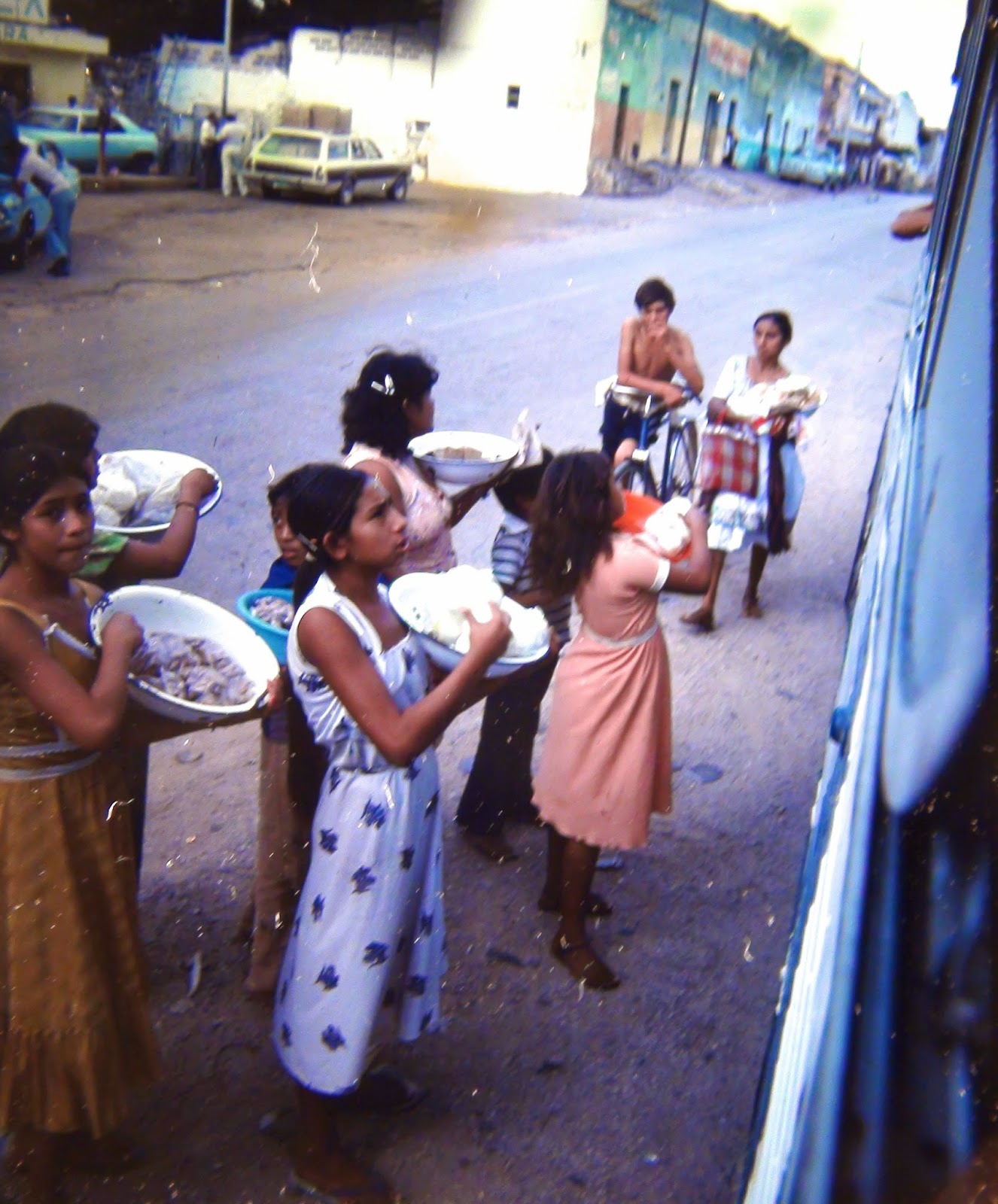 In February of 1987, I had to burn off some time I had built up at the Forest Service, Joan had to work, and so instead of facing the cold February without much to do, I decided to take a solo jaunt through Mexico, Guatemala, and Belize.  After flying to Mexico City, I planned to do the bulk of my traveling, like the poorer natives--on the “chicken bus.”  These were older public transit and school buses, who got the name by carrying the farm folk and often, their livestock.
Here is my diary entry for Feb. 22, 1987, when I was leaving San Christobal de la Casas in the jungly Chiapas state of Mexico:

Another early start to the morning, I beat the alarm, which I had set for 5:45.  Again, I woke to rumblings in my lower digestive tract, but the Lomotil, seems to holding things together.  It was a cold misty walk with my bags, through the dark streets, empty, except for the odd guy on a bicycle, and an old Mayan woman, scampering across the street toward the lit facade of an old cathedral.
I waited at the bus station for twenty minutes, before finally being able to board an older model bus to Cuauhtemoc, which is at the Guatemalan border.  The first part of the trip was picturesque with the dawning sky, lighting the low lying smoke, that hung between the limestone hills and Indian huts.
The mad-man bus driver, screamed down the highway, dodging everything in sight--horses, trucks, old ladies with their grandchildren, honking his horn, and de-accelerating each time the 95 km warning beeper went off.
Things got a bit confusing once we reached the Mexico/Guatemalan border.  A Mexican official took my Mexican tourist card, then I had to walk across the border, a bit apprehensive, because I didn’t know exactly what to do, or what to expect.  The other Gringos (about 5 of them) followed.
A Guatemalan official gave me a Guatemalan card and asked me some questions (How long was I going to stay?  What was I going to do?)  I paid him 2,000 pesos, then, when I was done, went outside, where a soldier motioned me over toward another official, who looked at my passport and gave me another card of some kind.  He also asked me if I wanted to exchange some money.  I gave him a US $5, and 2000 Mexican pesos.  I think I got about 14Q in return.
Then, I just wandered out onto the street, not knowing exactly what to do.  The autobus that brought us to Cauauhtemoc was gone, there was however, an old white and grey school bus sitting there named “The Condor.”
I went over to ask the man standing there, if it would take us to a town where we could catch the autobus, but he just motioned me inside where the driver, a small man with glasses, wavy hair, a very sparse long beard, took my luggage and stuffed it into a small space beside the gear shift.  I was sort of hesitant to part with my bag, but since I was sitting right in front of it, in the front row, I didn’t put up a fuss.
The other Gringos filed in to the bus, and their luggage went onto the top of the bus.  The bus was practically empty, with just a handful of people, three of which seemed to be working or the Condor Bus Company, as they just hung around talking to the bus driver.  Finally, the Condor started moving down the road, stopping to pick up 20 more passengers, who appeared to be peasant farmers.  The bus helpers made the new arrivals leave their machetes at the door.
We drove on a bit further and stopped at a road blockade.  An armed soldier with a green polyester uniform got on, and one of the bus helpers motioned that I, and the other Gringos, had to get off, and he put my green suitcase on my seat by the door.
Bewildered, and not knowing what to expect, I stepped off of the bus, only to be met by another official, who looked at my passport and cards.  As he dealt with me, I watched a large crowd of people enter the bus, and my luggage go out the door and onto the roof of the bus.  When I returned to the bus, it was unbelievably packed with people, but my place in the front, had been saved for me.
The bus started on its way again, honking at vehicles, and people walking along the side of the road.  I wondered how far we had to go before we came to the next town--and a regular bus to Guatemala  City.  Then an amazing thing happened--the bus stopped and picked up more people.
I will continue the ride on tomorrow’s blog.


See my paintings at: www.davidmarchant.ca
Posted by Life in BC's Robson Valley at 10:56