On the Chicken Bus, Part 2 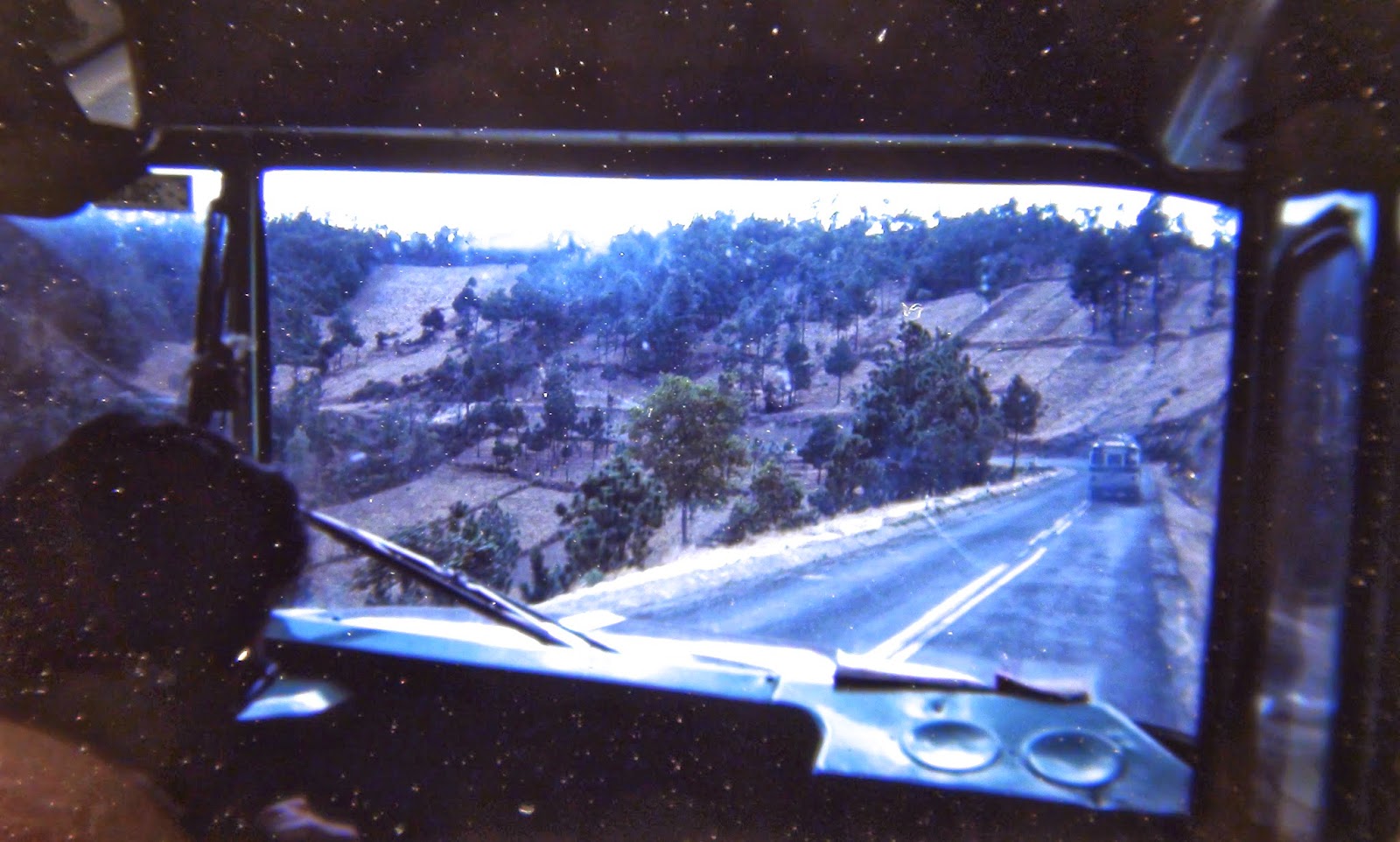 Already the bus was packed solid.  People, shoulder to shoulder, squirmed in their seats, and the aisle, from as far back as I could see, up and including the steps beside the driver, was crammed with standing passengers, jostling and swaying in unison, as the bus maneuvered one curve after the other along the mountainous road.
I was squeezed into a seat beside the side window in the front row, my knees against the waist-high aluminum partition that separated the seating area from the steps that led down to the door.  As I looked forward, trying to see out of the windshield, I had to peer over the head of a grizzled old Mayan man in a well worn cowboy hat, sporting a thin mustache, and wearing fancy old female glasses, complete with jeweled wings, who faced me, as he stood on the steps, clinging to the handrail bar that ran across the top of the partition.
The bus, speeding down the highway, was traveling with the door open, with one of the helpers standing on the lowest step, hanging on to the rear view mirror.  Another helper was totally outside of the bus, clinging to the open window beside me, I had no idea what he was standing on.
We passengers, were packed like sardines.  Beside me, on the front seat, was a farmer, and beside him, next to the aisle, sat another man holding a young girl on his lap.  The girl was clutching the top of a woven plastic bag that squawked each time those standing in the aisle squashed against it, while trying to maintain their balance on the curves.
A little into the trip, the bus helper who had been hanging on outside, forced his way up through the crowd standing on the steps, to the aisle.  Then grabbing the vertical pole that stood beside the aisle at the end of the partition, he swung his leg around, putting his foot on top of the metal handrail that ran across the top of the partition.  Shifting his weight and lifting himself, he somehow managed to put his other foot on top of the handrail pipe that ran along the top of our seat back.
He ended up hovering above me, his butt wedged against the curved wall above my window, his back against the ceiling, and one foot on the partition in front of me, and the other resting on the top of our seat back.  Once in this position, he looked down on us and began hitting people up for their tickets.  Once he had finished with our row, he carefully moved on, straddling the row behind us.  He collected their tickets, then he worked his way back again, straddling row after row to the back of the bus, with his feet on the seat backs and hovering over the passsengers.
At this point, I noticed the head of a small chicken poke out of the little girl’s bag.  Once it saw how ridiculous the situation was on the outside, it ducked its head back down into the bag, and I never saw it again.
The bus continued, at a good clip, swerving back and forth, and up and down, along the snaking highway.  Suddenly, at a low spot, the bus driver pulled over to the side of the road and stopped.
I assumed that it was going to let someone off or to pick up passengers, but there was no one there to pick up, and no one fought their way toward the door.  I couldn’t figure out why we stopped.
The helper, who was still at the bottom step in the open doorway, started yelling at all of the passengers standing on the steps, and worked his way up toward the driver.  Once he had managed to move most of the people out of the way, he began rooting around amongst the packages, bags, and machetes, that were piled up, beside the gear shift, until he was able to free a blue plastic bucket.
Bucket in hand, he jumped out of the bus, scrambled down through the vegetation along a creek, dipped the bucket into the creek to fill it full of water.  As he did this,  the other bus employee, who was now outside, had walked around to the front of bus, lifted the hood, and with a cloth opened the radiator cap.
Water from the bucket was poured into the steaming radiator, the cap screwed back down, the hood slammed shut, the engine began to once again roar, and the last helper grabbed the mirror and swung himself into the open door, of the already moving bus.  The Condor was, once again, soaring again through the Guatemalan mountains.


See my photo-realistic paintings at:  www.davidmarchant.ca
Posted by Life in BC's Robson Valley at 11:11