On the Chicken Bus, Part 4 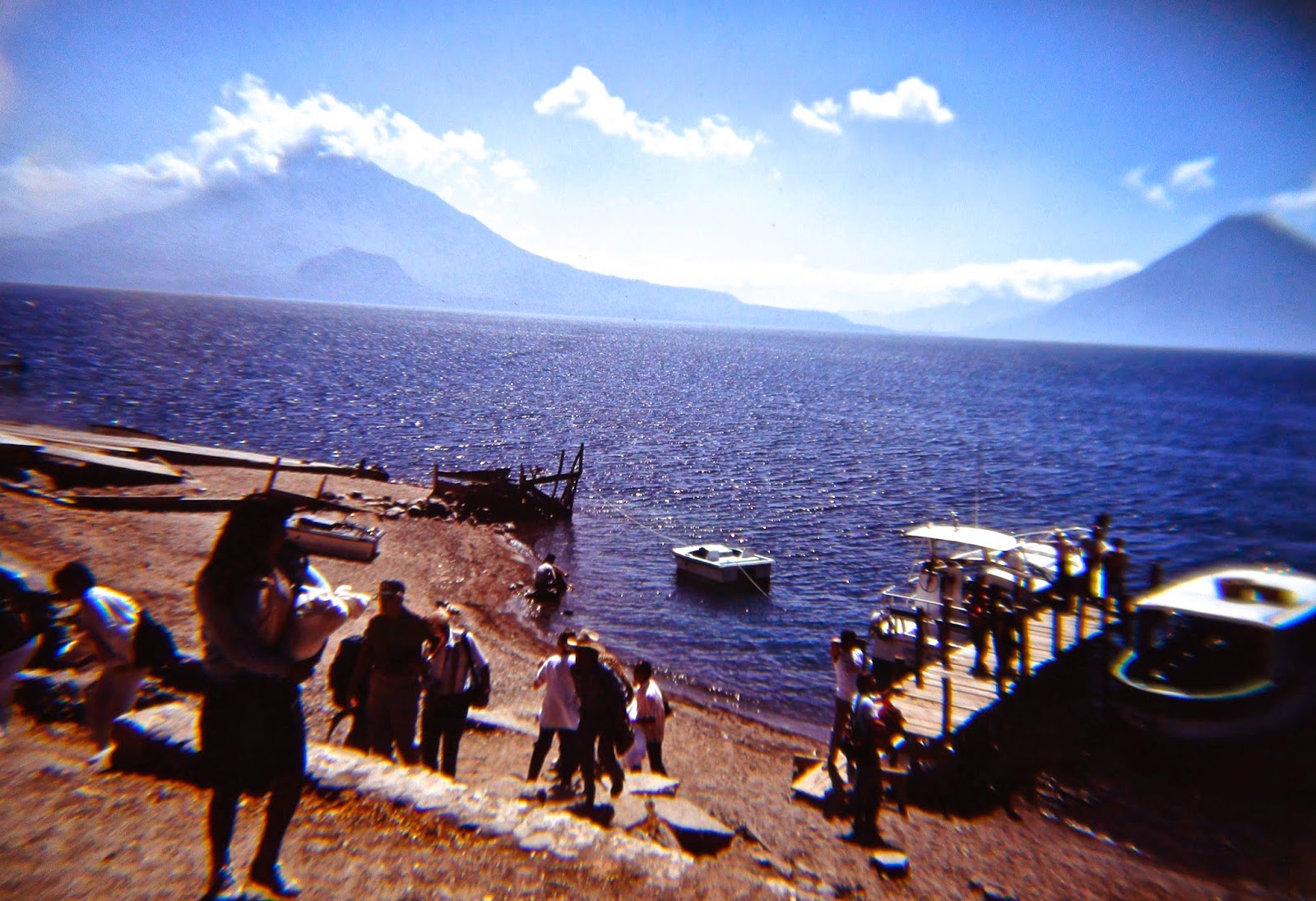 The photo shows, Lake Atitlan, Guatemala.  Today’s blog tells of leaving this area after a couple of days of exploration.

My first surprise of the morning came early.  I stepped out of the shower, and realized that the hotel I was staying in hadn’t left a towel in my room.  I was too wet to go to the desk to get one, so I ended up drying myself with the pillowcase.
The young guy at the desk told me the bus to Chimaltango comes by at 10:00, first coming up the street, then returning.  I waited and sure enough, it came at 10:05.  As I waved, the guy on the bus shouted something back to me that I assumed meant that I was supposed to wait until it returned.  I waited.   At 11:00, I was still waiting and beginning to get nervous about the bus not returning, so I caught a mini-bus up to Solola.
There, at the plaza many buses were waiting.  All of which looked like they should be condemned.  The “gringo’s” who rode with me on the mini-bus, all got on to an old green school bus, so I wandered over to it, and asked the bus helper, “Antiqua?” which was my destination.
He nodded and said, “Change, Transfer..”
I handed him my bag, and watched it as it was thrown up to the helper who was arranging bags on the roof of the bus.  Since the bus was already full of passengers, I was directed to walk around to the rear of the bus, and there I found that the back door was open, so I climbed in.  All of humanity already inside, filling the bus, but there was one place left to sit on the back row of seats, and so that is where I sat down.
I was feeling sort of uneasy, with never really knowing what exactly was going on, or if I had the right bus, and just the whole business of not really being able to communicate, and now there was something else that was causing my unease to mount--the smell of excrement.  As I nervously sat there, I wondered why the bus smelled like shit.
The bus, now full, and the door behind me closed, ground its gears, and headed down the highway.  While rocking back and forth as the bus traveled, I tried to calm my unsettled and insecure state of mind, when suddenly, something under my seat, brushed against my leg.  I jumped.  My first inclination was that there was a giant snake under my seat.  Startled, my calf was then hit again, this time with an accompanying snort.
Nervously, I bent down to see what was under my seat.  To my great relief, it wasn’t a boa constrictor, but a live pig in a bag.  I exhaled deeply, and suddenly, was no longer apprehensive, even through I still wasn’t sure where this bus would let me out, or if I would be able to catch another bus before nightfall.
I really didn’t have to worry, although the Guatemalan buses seemed to me to be so unorganized and haphazard, they somehow always managed to get me to a place where I could catch a further bus to my destination.