On the Chicken Bus, Part 3

The area around Huehuetenango is very dry and reminiscent  of Kamloops, BC.  As we pulled into town I saw what I assume was a funeral parlor whose name was something like, “El Ultimo Adios”.  The bus made a half an hour stop here in Huehuetenango.
I was very hesitant to get off the bus, because I was afraid of loosing my seat, but when I saw the helpers make an old lady, who didn’t want to leave, get off, I knew everyone had to, so I got off.
I found a restroom and had a coke, then looked up, discovered that the bus was gone.  I knew it would be back, and when it returned, there was a mad rush for the door, and one of the helpers yelled and tried to get the teaming millions to move back onto the sidewalk.
He pointed to me and motioned me back onto the bus, while threatening the mob with police, if they didn’t stay back.   All of the “Gringos” were let back on, as they filtered out of the building.
Then the bus employee put his young girlfriend and her kid, and their portable black and white TV set on, seating her beside me.  A man from the Condor bus office came out with a paper full of names, and stood blocking the doorway, reading out a name, then letting that lucky person onto the bus.
Once all of the names were called, he just picked among the multitude of pleading faces.  The bus was again, very tightly packed.  The helper, then came onto the bus and had his girlfriend and I stand up.  He then, unhooked the seat cushion we had been sitting on, from the frame, and shifted it over about 8 inches (20 cm), away from the wall, and toward the aisle, .  This allowed another passenger, who was standing in the aisle to sit, but it also mean that since I was the one sitting next to the wall, I was left with just half a seat cushion to sit on.
So there I was, squeezed against the wall, next to me was the girlfriend holding her black and white TV set, next to her was her 3 year old kid, and next to him, sat the lucky passenger, who now had a part of a seat.  This is how we spent the next 4 hours.
After a while, my knees became tender from being buffeted against the partition in front of me, and the muscles of my buttocks began to complain about the restricted position they couldn’t escape from.  I shifted my weight as much as I could, but the relief was only temporary.
The bus made another radiator stop at another creek, and I was able to stand in place for about 3 minutes, but then had to resume the sardine position.
As we climbed toward Solola, we passed through some beautiful countryside.  Near-vertical barley fields, (I think), clinging to the steep volcanic slopes amongst the pines.  Everything is brown and green, accented with golden piles of straw along the road and the pinks, purples, and reds of the Mayan Indian women.
The Guatemalan countryside seems cleaner than Mexico, not as much litter along the roadsides, at least in this area.  People graze there sheep right along the road, which keeps the grass short and neat, with no weeds.
Mexican towns seem so funny;  Everyone is always  outside the buildings washing and sweeping the sidewalks, but at the same time, everyone is always throwing trash on the sidewalks.  You can never find a litter barrel or trash receptacle.
More Chicken Bus tomorrow. 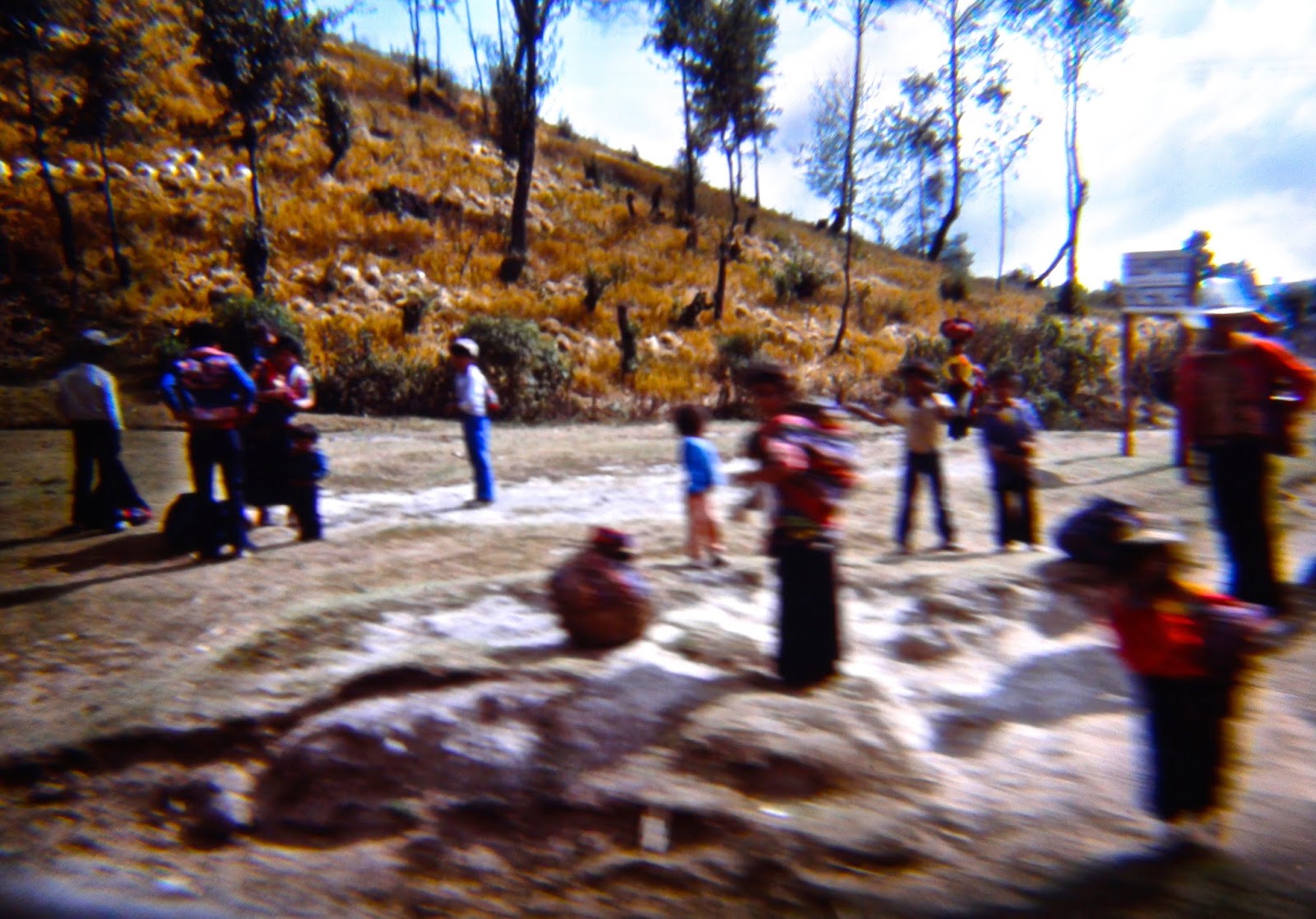