The Flatshare by Beth O'Leary 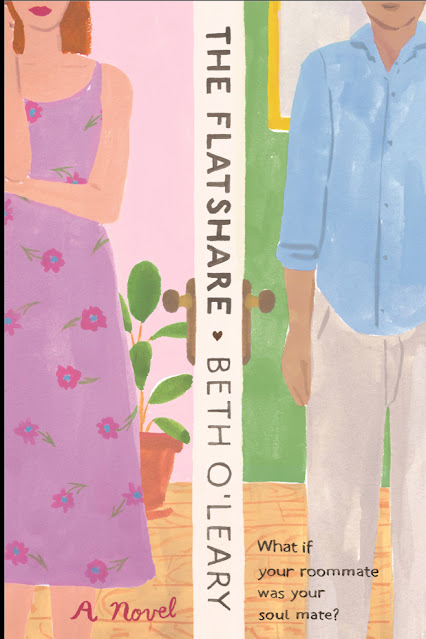 The Flatshare by Beth O’Leary

The November theme for our McBride Library Book Club was “Feel Good Books.”   Honestly, I really wasn’t in the mood for light reading, but being a good sport I relented, and did an internet search for “Feel Good Novels”.

The Flatshare was one of the titles that came up.  The description of the book really didn’t knock me out, but it seemed okay, and it was immediately available on OverDrive, so I down-loaded it to my iPad.  The Flatshare is not the kind of book I generally read and I was expecting it to be more like an assignment rather than an enjoyment, but I did enjoy it.

The plot line revolves around two characters:  Leon, a mixed-race, introverted, male, palliative care nurse, and Tiffy, a tall, quirky, red-headed, poorly-paid, female editor of a publishing house specializing in books for crafters and do it yourselfers.    These two different personalities, both living in London, don’t know each other, but they have a common problem:  They are both short on money and seek a solution.

Leon, the male nurse has an apartment, but he needs money for a lawyer, because his innocent brother has been incarcerated in prison.  Taffy, the editor has been living in her ex-boyfriend’s apartment, while he lives with his new girlfriend.  She desperately needs to find a new place to live, but can’t afford the very high London rents.

Since Leon only works at night, he decides to find someone who wants to live in his apartment that works days and will only need it at night and weekends (on weekends Leon lives with Kay, his girlfriend).   He and the flat-sharer could split the rent for the apartment.  He assumes the flatsharer will be another male, but Tiffy applies.

Kay, Leon’s girlfriend, isn’t keen on this arrangement, but will allow it only if Tiffy and Leon never meet, and Kay will always be the go-between for the two.  When Kay meets outlandish Tiffy, she realizes Tiffy is not at all Leon’s type, so she okays the apartment sharing scheme.

So Leon and Tiffy don’t meet, but share the same apartment and use the same bed.   I’m sure you have already figured out where this storyline is headed.

They never see each other, but live amongst the other’s clothes, furniture, food, and other things.  They communicate with each other with Post-it notes left on household items and text messages over the phones.

As you guessed, they soon really begin to like each other just by the brief notes they leave or send.

The novel is made up of short chapters written in the first person, that alternate between Leon and Tiffy.   These short alternating chapters which are largely made up of the terse messages on the post-it notes and text messages that the two characters exchange do build the novel’s plot and round out the personalities of the characters.  They also generate curiosity that makes the reader keep on reading.

The book does rise above merely being a “fluff piece” by dealing with subjects like bullying and emotional abuse in sub-plots.

As it happens, our scheduled November book club meeting disappeared with the tougher restrictions due to Covid, but at least I can put my review out there on my blog.