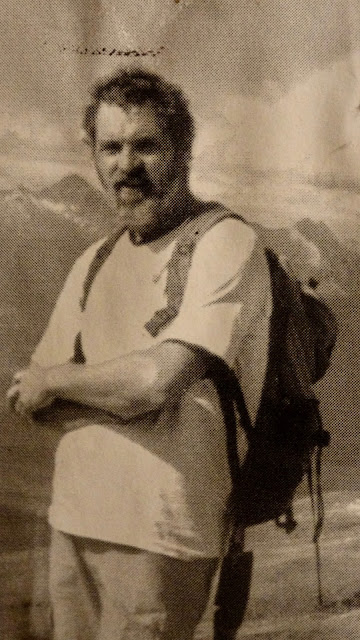 December 26th is the Boxing Day holiday in Canada.    Growing up in the U.S. as I did, December 26th, was just December 26th; I had never heard of Boxing Day, and it took me a while to find out about it even after we moved to Canada, because we were usually gone over the Christmas break.  It is a holiday in Britain and a lot of the Commonwealth countries.   When I first heard about it, I thought it had something to do with two guys pounding on each other in a ring, but then learned that it was a day when the rich people used to box up gifts for their servants.

Because we weren’t rich, and didn’t have any servants, we normally didn’t have any regularly scheduled things to do for the day, but we were very happy to have the day off.

On Christmas Eve of 1997, we hosted a small get together of friends at our place.  Among the people that attended were John Bird and Margaret.  John had been a close friend since he and his wife Linda, had moved to an old log home just down the road from us.  Later, he and Linda split up.  John was a creative woodworker, and great outdoorsman.  I always considered him the healthiest person I knew.  He was very careful about what he ate and he always made me feel guilty, because he was always jogging up the road or hiking in the mountains.

There was nothing unusual that happened on that Christmas Eve get together.  We ate and we talked.  It was a nice event.  The following day on Christmas, we all got together again.  This time, we joined John and Margaret for a meal up at Margaret’s place.  Again, it was just a friendly  gathering and nothing extraordinary occurred.

The following day was Boxing Day.  We just had a quiet day to ourselves.  It was a Friday, so in the evening we fixed our traditional Friday night pizza.  I remember how cozy and comfortable it was in our living room.  The Christmas tree lights were glowing and the fire in the wood stove was warm.  Then there was a phone call.

I got up and answered the phone.  It was the hospital.  They said that John Bird had died, and Margaret was there and could we come in to give her some support.  We were struck numb with disbelief.

We rushed down to the hospital, and walked quickly down the empty hall to the nurses desk.  I happened to glance over down one of the hallways and notice a smallish girl hunched over on a bench.  When we got to the nurse’s desk, she pointed us over to Margaret, and then I realized that the “smallish girl” I had seen on the bench was Margaret.  It was like she had shrunken.

We hugged and cried.  I don’t see how we could have offered any comfort to her, we were so distraught and broken up ourselves.  It seem that John had gone cross country skiing during the day, then returned home and was taking a bath, when he started having chest pains.  He managed to call Margaret, who rushed over, and got him in the car and drove him to the hospital, but John suffered a massive cardiac event and died on the way.  He was 51 years old, the same age as his father when he died the same way.

John had a huge circle of friends, and the news of his death struck everyone the same: shock and disbelief.  It fell to me to make one of the most difficult phone calls I have ever had to make.  I had to call Linda, John’s ex-wife, who had moved to another small BC town, to tell her of John’s death.  I hadn’t spoken to Linda for a long time, and when she answered her phone, and I told her who it was, she said, “David”, her voice filled with delight and excitement, upon receiving an unexpected phone call from an old friend.

I felt it was best just to be direct, so I said as gently as I could, “Linda, listen.   John is dead.”

It felt like I was crushing someone with a hammer.  There was silence at the other end of the phone.  I gave her a brief explanation of what happened, but the silence remained.

“I can’t talk now, David.  I will call you back later”

Those events are the ones that always come flooding into my mind every time I hear a reference to Boxing Day.  In a normal year, Boxing Day becomes the big shopping blowout day of the year, a chance for big bargains.  The news is always full of people lined up for hours waiting for the stores to open their doors then rushing to the counters.

But I always think about 1997, and our friend John, who seemed so healthy and vibrant.  I think about how precious and fleeting life and friendship are, and how we really should be more cognizant of them and celebrate them more than we do.