Lexi, We Miss You Terribly 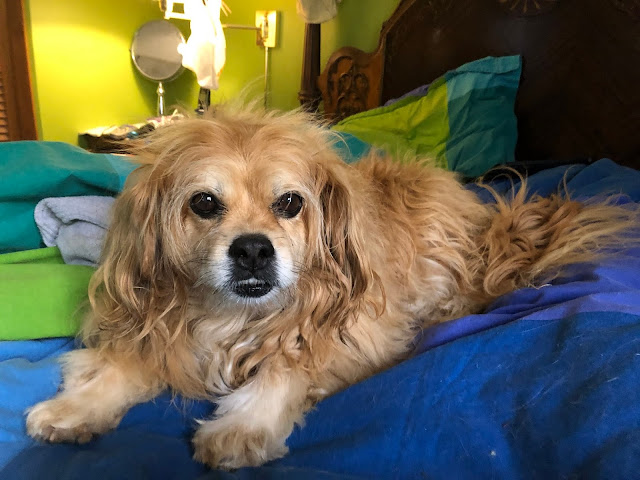 Yesterday was the day we have been dreading for months; the day we would loose our dog Lexi.  She had been diagnosed with an aggressive form of lung cancer, so we knew the day would come, but it didn’t make it any easier.
Anyone who reads this blog regularly knows just how much of our lives had been built around this little dog.  Most of the photos I have posted were taken on our dog walks.  She was a part of a hundred things we did each day, everything from feeding the birds in the morning to licking out the cat dish if Lucifer had left anything.  Every time we went into the kitchen, she suddenly appeared.
We only had Lexi for less than a year.  She was a rescue dog who had come from an Indian reserve in Saskatchewan.  When the SPCA visited the reserve to pick up unwanted dogs, a man came out with Lexi, and said, “Here, take this one too.”
We were surprised with Lexi.  She was estimated to be between 7-10 years old, but we figured an older dog would be better for us old people that a young dog.  To our amazement, she was the most energetic dog we have ever owned.  She had a wild heart and her nose would take her off, no matter how loud we yelled for her to stop, so we had to keep close tabs on her, and we soon learned to keep her on a leash for all of her walks.  Even then she would often take off running, which caused me running right beside her, and she was fast.
She was not the most affectionate dog we have had; she would often flinch when you started to pet her head, so we learned to scratch her back instead, which she loved.  It was only in the last months of her life that she began to wag her tail when she saw us.
I buried Lexi beside the rock which marked the grave of Skye our previous dog.
We are left hollow and numb.

You can view my paintings:  davidmarchant2.ca