Cows on the Road 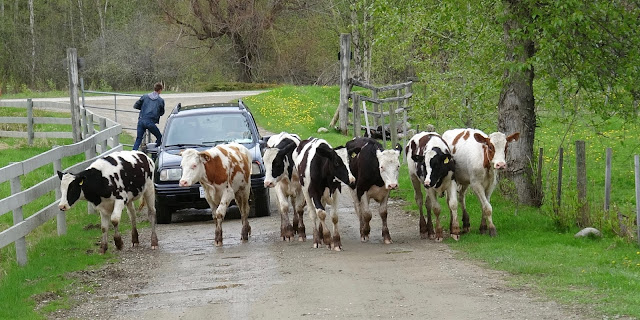 Last evening as we were driving to Koeneman Park to give Lexi a walk, as we looked down from the hill at the Mennonite Church, we were surprised to see that the road below was full of cows.  We recognized them as belonging to Les who lives at the bottom of the hill, so I whipped into his driveway to tell them that their cows were out.  As I approached the house Carrie came out and I told her.
“Where are they?” she asked, and I replied that they were just on the road in front of her house.
She explained that the cows had been missing for 2 hours and Les has been out looking for them unsuccessfully.  She was just about to call Les on the phone when I spotted his car coming down the road.  “He’s here.” I told Carrie.
Les herded the cows to his driveway (photo) and once they were back in their paddock, he asked me,
“Were they up at your house?”
I told him, “No, just on the road in front of your house.”
If Les had been out looking for them for two hours, they must have been hiding in the bush all that time and then decided to come home.
The whole situation was sort of a de vu for us.  One other time on another long weekend (this was our Victoria Day Weekend)  we were driving down the road and saw one of Les’s cows on the road, only that time no one was home, so I herded the cow onto their driveway and closed the gate behind it.
I hope Les finds the escape hole in his fence.