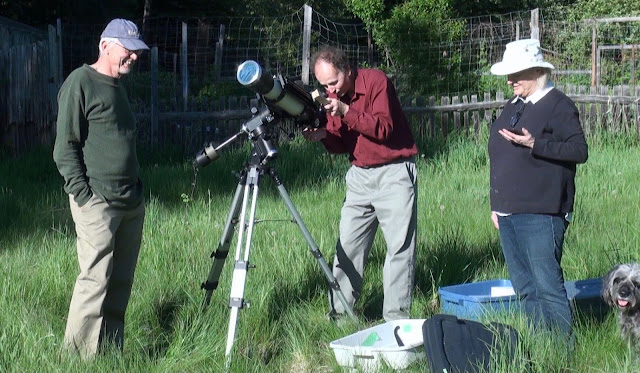 Yesterday we had two friends, Jim Swanson and Matthew Wheeler, over for pizza.  Matthew, local astronomy enthusiast, surprised us by bringing his telescope which he set up in the pasture.  He said it was a good time to look at the sunspots which were growing to a good size.  I have never viewed sunspots before through a telescope so it was quite interesting.
Through the telescope we could see a cluster of the spots, which at first glance looked like one big one.  Later, after the pizza, and after it began to get dark, we tromped back out to the pasture and viewed Jupiter and 4 of its moons, tiny pinpricks lining up in a plane, spread out on both sides of the planet.  With the telescope we could also see some of the bands across Jupiter’s face.
It is was all an unexpected, out of this world, experience.