Our Cat's Name is Lucifer 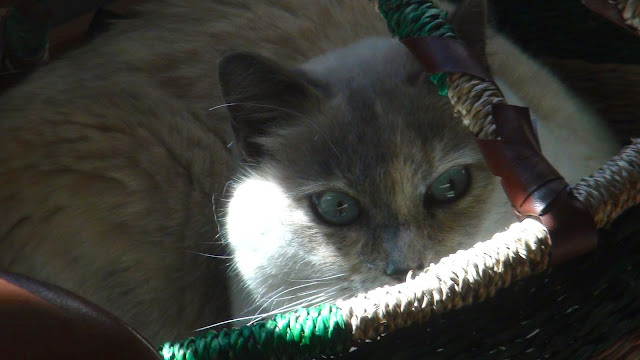 I have written before about our cat’s mean behavior.  The other evening we got another example.  We had just started on our daily evening walk around the pond when it happened.  You might remember that during the walk each participant has to maintain the correct position in the parade or else it doesn’t work.
I generally lead the parade, followed by our dog Skye, with Joan following her, and Lucifer bringing up the rear.  Skye is afraid of Lucifer, and if Lucifer gets in front of Skye, she usually likes to stop to show off her power over the dog, and the dog responds by sitting down afraid to move past the cat.  This will go on until the cat finally feels her status has been established and then she begins to move down the path again.
This situation happened a couple of days ago.  Lucifer got in front of Skye and stopped, and Skye responded in her normal meek way.  Joan, anxious to make things right again, moved beside Lucifer, which offered protection to the dog, and urged Skye to detour around.  Skye timidly did, and then when she felt free from threat, streaked on to me.
Then Joan again took her place, third in line and the parade began once again.  However, Lucifer felt slighted by Joan’s actions which offered Skye an escape, and so as Joan walked on, Lucifer suddenly darted forward, catching up to Joan, and biting her on both legs.
Now you know why our cat is named “Lucifer.”