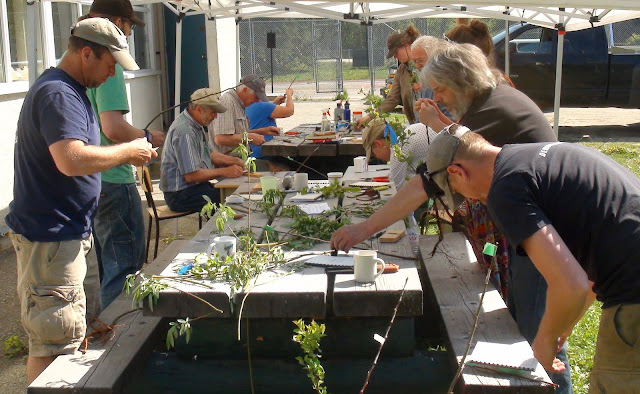 If you bite into a really tasty apple and decide to save its seeds so that you can grow your own tree of that particular tasty apple, you have something like a 1 in 20,000 chance of getting that same tasty apple off of your new tree.  Apple seeds don’t reproduce the exact copy of its parent tree, so to get the same kind of apple, you have to graft (attach) a branch of that tree on to rootstock (root) of some kind of apple tree and let it grow.
Yesterday, I drove out to Dunster, BC to attend a workshop put on by local apple expert, Jeff Corbett.  Jeff gave us a short introduction to the world of grafting, then let us practice cutting and joining together willow branches, with many warnings about being careful not to cut ourselves with the sharp knives. After practicing with the willows, we were supplied with rootstock and “scions” (branches) from northern varieties of apple trees, and we all began grafting our own apple trees.


It was an enjoyable and productive afternoon, and I came home with two varieties of apple trees which I hope will survive all my bungling.  In the photo below Jeff picks out a suitable rootstock for a student, with the jars of different varieties of scions in the foreground. 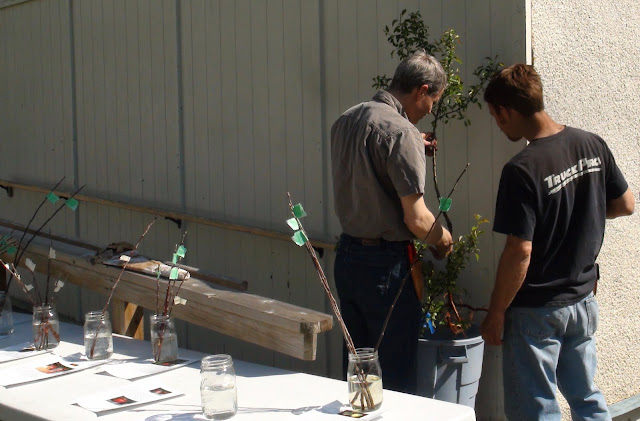 You can view my paintings at:  www.davidmarchant.ca
Posted by Life in BC's Robson Valley at 09:40